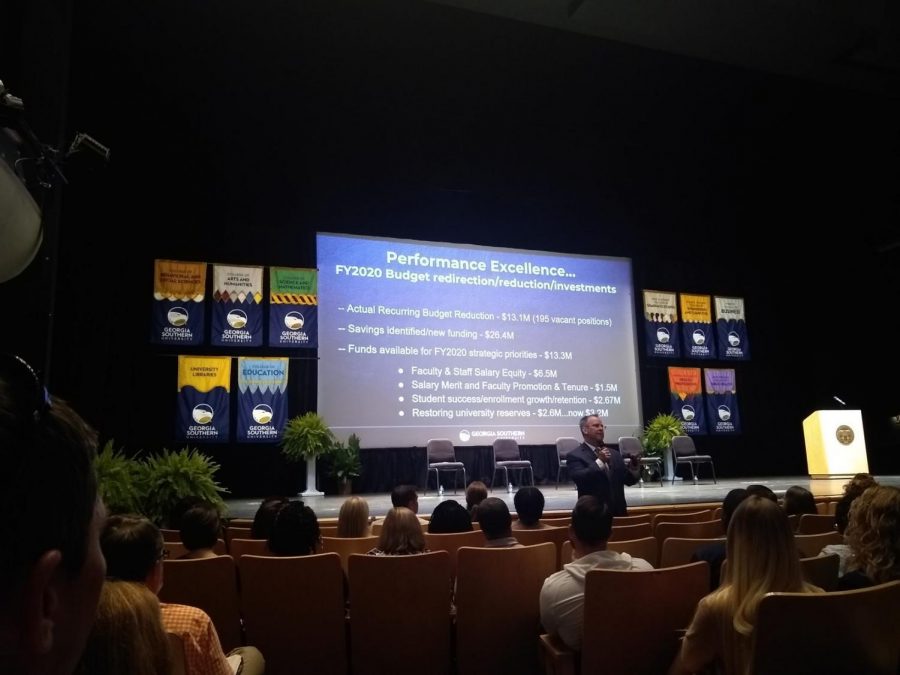 Georgia Southern University President Kyle Marrero addressed the university's budget for FY20 at the State of the University Wednesday in Statesboro.

STATESBORO — Georgia Southern University President Kyle Marrero spoke in detail in regards to the university budget at the State of the University in Statesboro Wednesday announcing that the GS budget was reduced by $13.1 million.

His talk focused primarily on how GS established a budget that took into account the decline in revenue while also touching on future investment.

According to Marrero $26.4 million in potential savings was identified. A sizable portion of these savings was ending the search to fill 195 currently vacant positions at GS.

No filled positions were removed to make room for savings. These cuts left $13.3 million to be reinvested to help stabilize the budget for future years.

In Marrero’s presentation he broke down how that money would be invested.

$8 million went into faculty in staff, with $6.65 million going towards establishing salary equity, while the other $1.5 million went towards funding promotion and tenure.

Another $2.67 million went into student success and retention. According to the presentation this is for both financial aid and student quality of life, including hiring more counsellors.

The final $2.6 million went towards the reserve for next year’s budget. That coupled with money saved from merit leaves $3.2 million set aside for the next budget.

“Our goal is to model a budget that fosters your engagement and our transparency,” Marrero said.

The university estimates that GS will need to allocate $7 million to account for 2021 budget reductions. This means the university will need $3.8 million along with the $3.2 million they have already set aside.

Marrero also addressed concerns about the 195 vacant positions and their importance.

In terms of new funding, it will come from either fiscal growth in the coming semesters or, if need be, a tuition increase. This increase would be decided by the board of regents in April if that is the route needed.

“We’ll look for those critical positions from an operational or a curriculum delivery standpoint that we have to have to deliver our promise for students and those will be funded first,” Marrero said. “We take this very seriously, we do not want to raise tuition.”