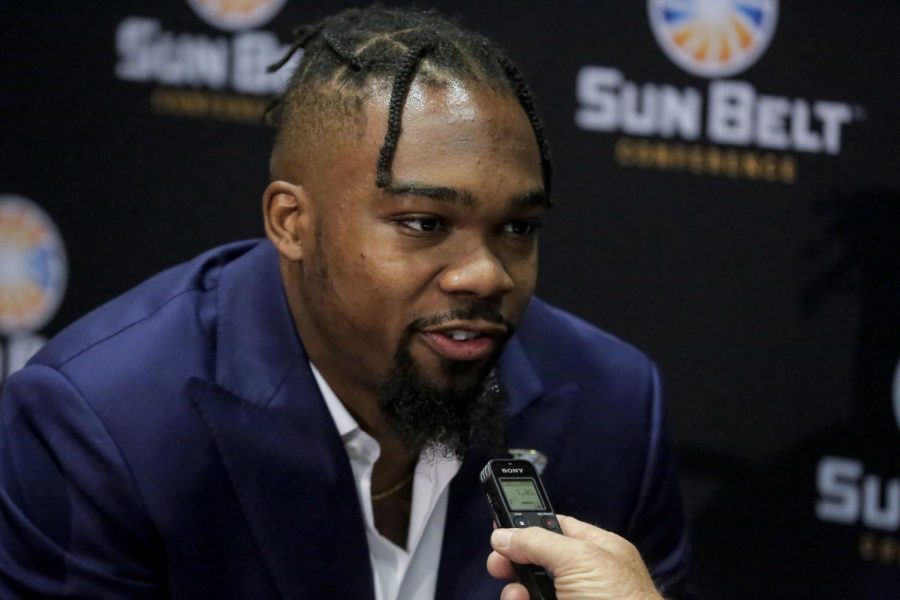 NEW ORLEANS—Georgia Southern’s senior cornerback, Kindle Vildor, is one of the nation’s best at his position, but Vildor’s talents don’t stop with football. In fact, you could call him a two-sport athlete due to his proficiency in basketball.

Well, in NBA 2K, that is. When asked who the best 2K player on the GS roster, Vildor gave an adamant answer in his favor.

“Me,” Vildor said. “Not going to lie, me without a doubt. My other teammate, Sean Freeman, former safety, he good too, we still play and stuff like that but now, he gave me the throne.”

Vildor and his teammates don’t play quick games with the preset NBA teams, but instead take a pickup approach by creating their own players, which makes Vildor’s skills that much more impressive.

The junior out of Atlanta has recorded seven career interceptions, including four in the 2018 season, and is poised for a dominant 2019 campaign. Vildor talked about how his team can continue their trajectory, following a 10-3 season, with a vaunted schedule on the horizon.

“Just going from good to great,” Vildor said. “Like Coach Lunsford’s always preaching each and every single day, whatever we do it’s all about the little things. Make sure we take care of that and we’ll be where we want to be for the season.”

Vildor has pulled in the accolades over the offseason, being named to a bevy of preseason awards, including the Bednarik and Thorpe Award watch lists and Sun Belt preseason defensive player of the year.

Taking care of the little things is instilled in the minds of the GS football team, who travels to LSU, Minnesota, Appalachian State, Arkansas State and Troy all in the same season, and Vildor said that preparation will be the key to be successful in these games.

“It’s going to come down just to watching film throughout the week, even watching film now on your own,” Vildor said. “Just a little earlier head start on those guys for big Power Five opponents, but, I mean, it’s gonna be about the little things and little techniques that will help me and my teammates separate ourselves when it’s time to play those guys.”

For Vildor, the rematch of the 2018 GS upset of App State is his most anticipated game in 2019, and with it being on the road, it’s certain that the game will be a big one.

In the upset victory, Vildor hauled in two interceptions while deflecting one pass and recording two tackles in his biggest game of the season.

“Each and every single game is important,” Vildor said. “I feel like, one for me personally I’m ready to go to App State. Just going out there, I know they’re gonna have a crazy crowd, everybody have on all black, Halloween, ESPNU game, so I’m ready for that. That’s gonna be a fun game.”

Vildor and company still have 40 days until their season opener down in Baton Rouge, but for now, there’s plenty of time for him and his teammates to brush up on their skills, both on the gridiron and in 2k.