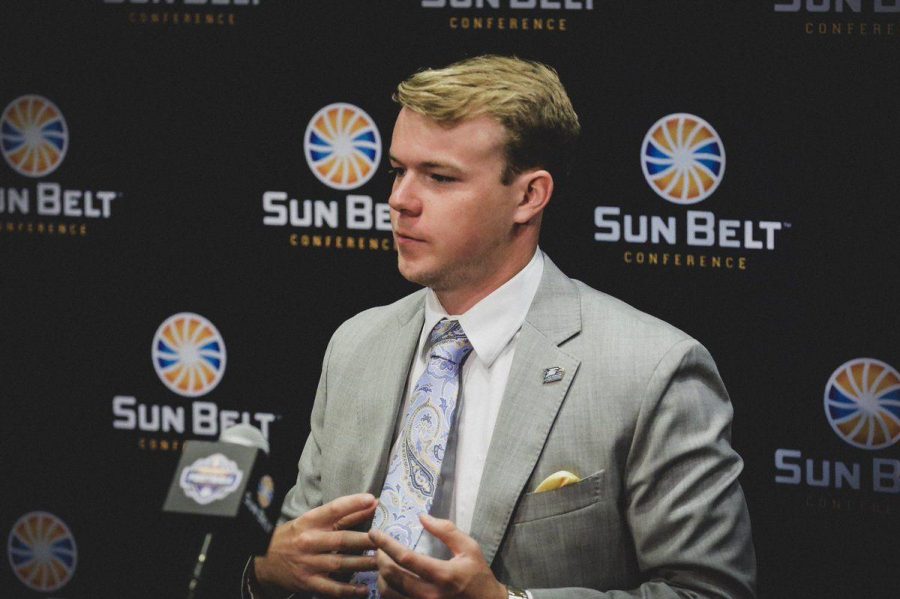 Bass was chosen for the 2019 Sun Belt Preseason First Team along with fellow Eagles Raymond Johnson III and Monquavion Brinson.

NEW ORLEANS—When he’s not capping off historic football seasons with game winning kicks, redshirt senior kicker Tyler Bass is probably listening to Lil Baby or watching a Mark Wahlburg movie. Bass finds the ‘Ted’ actor to be fascinating, enough to cast him as himself in a biography.

“I’m a big fan of Mark Wahlberg,” he said. “[I] love Entourage, love every movie he’s in. Any movie he’s in I would say is great.”

Bass, the hero of the 2018 Camellia Bowl, has put the team’s historic 10-3 season behind him in order to prepare for the upcoming year.

Last year, the South Carolina native made the All-Sun Belt Conference First Team, AP All-Bowl Team and All-America Second Team. Bass went 19 for 21 in his junior campaign. He can attribute his consistency to a strong work ethic, which is shown in practice.

The kicker stays in the zone during practice, with help from popular artists like Drake and Lil Baby. He’s recently started listening to some country music, but he wouldn’t necessarily consider himself a music connoisseur. He admits that he just shuffles the Spotify Hot Country playlist and tries to enjoy it. He doesn’t have a favorite album, either, he just chooses random songs from various discographies.

GS has a tough schedule this year, with most conference games on opponent soil. Opening up the season in Baton Rouge against LSU, GS will definitely start the season out with a bang. He explains that they are not shying away from the competition, because they are effectively preparing for the challenges.

“We prepare for each team the same way we prepare for any other team,” he said. “We just focus on our gameplan, focus on us and we just go from there.”

Bass wants to remain solid as a special teams player. The redshirt-senior knows he plays a large role in the success of the team. When he went out on the field for the last play of regulation during that bowl game, he knew all eyes were on him. The fate of the season was resting on his shoulders. His game winning field goal is just inspiration for him everyday at practice.

“I just wanna do whatever I can to help my team win,” he said. “Personally, I just wanna put myself to the test, really just try to exceed from last year, and just kind of build off what I did last year and just keep going up, little by little.”

Ryan Kostensky contributed to this article.