The George-Anne Media Group • May 14, 2019 • https://thegeorgeanne.com/2042/news/hanner-fieldhouse-reaches-capacity-for-all-four-college-specific-commencement-ceremonies/ 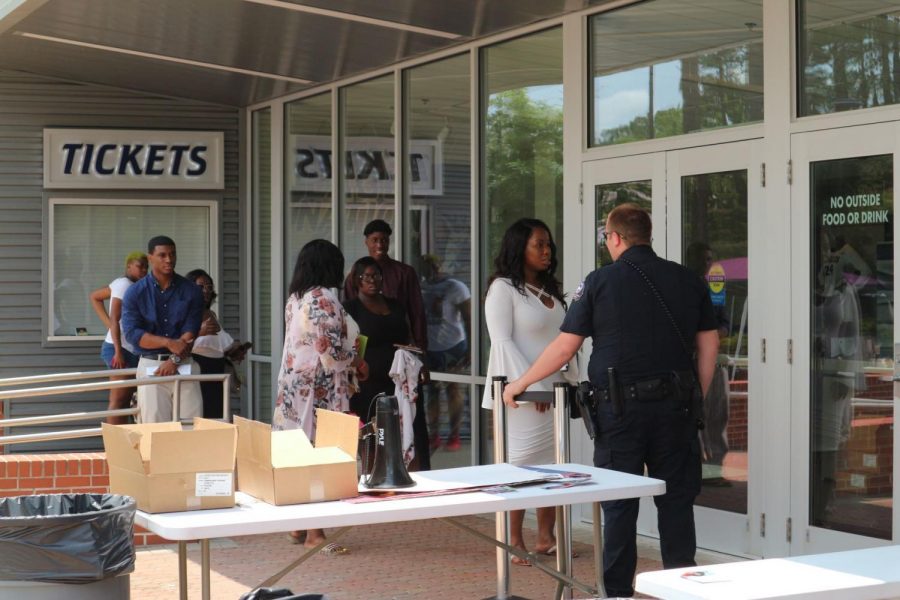 Alicia Brown, a wife of a GS graduate, was denied access into Hanner Fieldhouse at Saturday's College of Arts and Humanities ceremony.

Overcrowding in Hanner Fieldhouse at Saturday’s commencement ceremony for the College of Arts and Humanities at Georgia Southern University caused attendees to relocate to overflow areas and watch graduation via live stream.

Campus police began to warn attendees of possible relocation as early as 12:30 p.m.. Shortly after, officers announced over megaphones that the building had reached its maximum capacity.

Overflow areas included Russell Union and the Williams Center, where a live stream was available for attendees to watch.

Hanner reached maximum capacity at all of the ceremonies held there, two on Friday and two on Saturday.

Maximum capacity is determined by the amount of people inside of the building, not the amount of seats available, according to campus police. This protocol was established by GS’s Fire Marshal, Chris Colson.

“Please plan to arrive early and keep your entire party together at all times,” Georgia Southern Unversity said in a tweet. “Saving seats is not allowed, and anyone who leaves the arena after capacity is reached may not be allowed back in.”

Campus police officers did allow a woman and her children to reenter the building, after making the woman’s sister show the officers her reserved seats.

“I’m not not going to be in that building,” the woman said.

Alicia Brown, a wife of a graduate, told campus police that she was not able to see her husband graduate due to the building hitting maximum capacity.

“Do y’all want to go to jail,” a campus police officer asked Brown and her family after they questioned why they could not enter the building.

Many family members and friends of graduates were seen crying, shaking their heads, and raising their voices as they made their way to the overflow areas.

“We pay a lot of money for our students to go to this school and we want to see them on that special day,” a parent of a graduate said, “You know how many students. Simply find somewhere. We should be able to see the students graduate.”

Having the graduation ceremonies at Hanner Fieldhouse was not the best idea, according to Nicholas Parrish, sophomore theater major.

“To me personally, it just feels like with Georgia Southern’s tradition, it should be at Paulson Stadium with Freedom, the eagle, flying,” Parrish said.

The university handed out survey cards for those in attendance to give feedback on both the college-specific ceremonies and the university-wide ceremony that took place in Paulson Stadium Saturday morning. The link to the survey can be accessed here.