The George-Anne Media Group • May 5, 2019 • https://thegeorgeanne.com/2045/sports/softball-sweeps-rival-in-last-conference-series-of-the-season-secures-spot-in-sun-belt-tournament/ 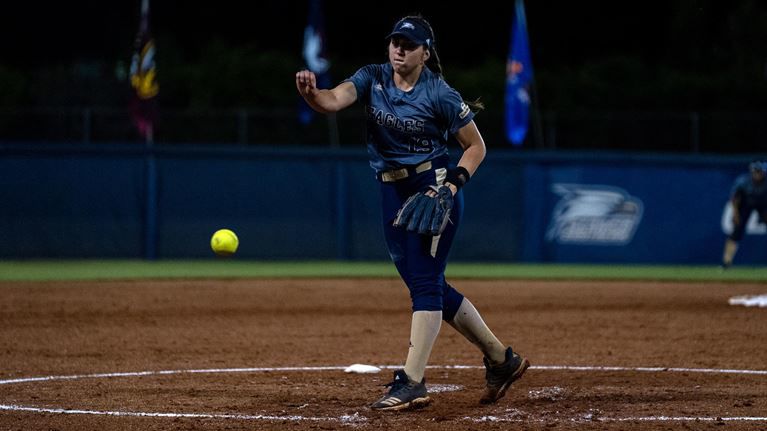 Senior pitcher Kaylee Ramos (19) took the win in game two for the Eagles, only allowing two hits and one run in her five innings pitched

The Georgia Southern softball team completed a home sweep of rival Georgia State in the last weekend of conference play.

With three more wins in the books, GS secured a spot in the 2019 Sun Belt Tournament in San Marcos, Texas. They will take on Coastal Carolina on Wednesday in the first round at 11 a.m. The game will be streamed on ESPN+.

In the first game of the series, GS eliminated the Panthers from making the conference tournament with the victory. A big hit from junior outfielder Mekhia Freeman in the sixth inning ran in freshman infielder Ashlynn Gunter to score the game winning run, breaking the 5-5 tie. Sophomore pitcher Rylee Waldrep allowed all five Panther runs in her 3 innings of work, before she was relieved by freshman Jodi Handler who took the victory during the rest of the game.

In game two, GS capitalized on a massive nine-run fifth inning to secure their conference bid. Tied at one after the third inning, with the RBI from senior Macy Coleman, both teams needed momentum for a win. Freshman Faith Shirley hit a home run to start out the scoring spree, which included nine more runs with help from hits from juniors Ellington Day, Freeman, and Shelby Wilson.

Senior pitcher Kaylee Ramos took the win for GS, pitching all seven innings, while only allowing two hits and one run in the 10-1 victory.

“They deserve to go to the conference tournament, “ Dean tearfully said. “They represent Georgia Southern and the sport of softball better than most. They did a great job all season.”

GS got on the board in the fourth inning with Wilson’s RBI and another home run from Shirley. This was her tenth home run of the season. Ramos took the win for the Eagles as she pitched her final five innings on Eagle Field. She retreated to the dugout with a round of applause from the stands. Freshman pitchers Shelby Barfield and Jodi Handler came in for relief in the final two innings.

The team finished the regular season with a 23-27 overall record and 9-17 conference record.