The George-Anne Media Group • May 22, 2019 • https://thegeorgeanne.com/2069/sports/baseball-eyes-conference-title-opens-tournament-play-against-louisiana/ 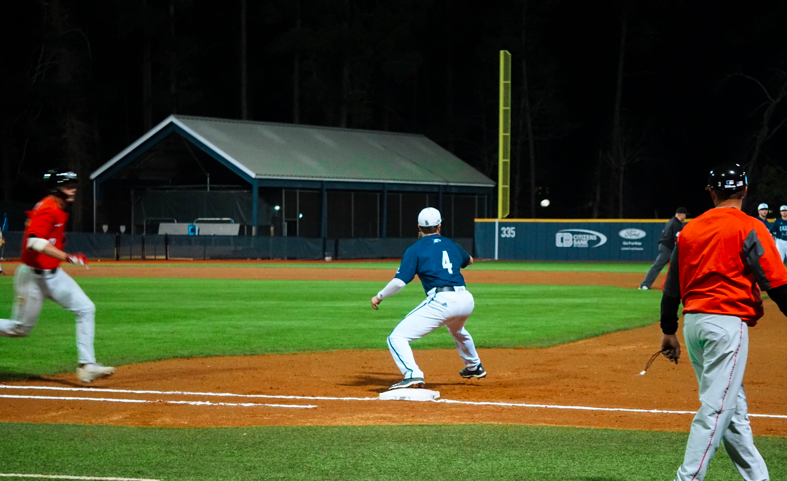 Three Georgia Southern baseball juniors, OF Mason McWhorter, RHP Seth Shuman and INF Steven Curry take home post-season awards, recapping a successful regular season for the Eagles. McWhorter and Shuman were both named to the first team and Curry was named to the second team.

McWhorter and Curry have been juggernauts in the GS lineup all season, with the OF hitting .380 in league play alone, and the infielder taking the league batting title with a .355 overall batting average.

Shuman racked up 104 strikeouts on the way his first-team nod, while accumulating a 6-5 record with a .364 ERA.

With the regular season in the books, the Eagles set sight on the dance, but have to take care of the conference tournament first, where they match up against the No. 8 seed Louisiana-Lafayette on Wednesday at 12:30 p.m from Conway, South Carolina.

The Eagles finished as the 2019 East Division Champs after an impressive 18-12 conference record. At 32-23 overall, GS exceeded expectations for the season with wins against power-five foes like Auburn, Georgia, West Virginia, the Eagles are positioned to make a run.

Shuman takes the mound just days after being named to the first team All-Sun Belt, looking to continue his dominant season. Shuman recorded 104 strikeouts in the regular season and finished with a 6-5 record.

Offensively, GS has quietly become a dangerous unit. Juniors Mason McWhorter and Steven Curry both received nods to the All-Sun Belt teams, with McWhorter hitting .380 off of Sun Belt pitchers and Curry hitting .355 for the season, but the offense features bats throughout the lineup that are all dangerous in their own way. Freshman Noah Ledford finished with 10 home runs, just one behind McWhorter.

The Ragin’ Cajuns used a 6-2 win against Appalachian State to propel into the second round for a date with the Eagles. At 28-29 overall, and 15-15 in conference, UL’s season has been underwhelming, yet with a three-game winning streak on the line, this team could be on the verge of becoming dangerous.