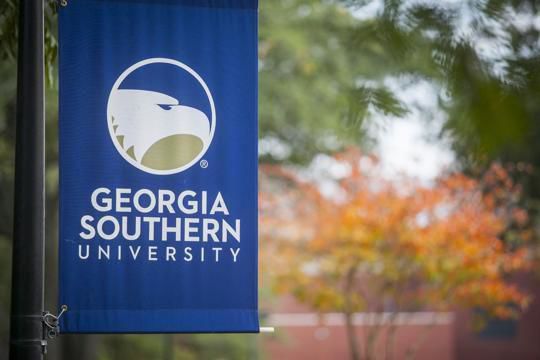 “Originally it was a 10% redirect,” Reiber said in the meeting. “Academic Affairs was then told 7.5% because we could not get to 10% without firing people, tenure, tenure track, etc.”

The initial 10% budget redirection was announced at the March Faculty Senate meeting by Rob Whittaker, vice president for Business and Finance.

The budget redirection comes after declining enrollment and credit hours on all three of GS’ campuses over the last two years. Both student headcount and student credit hours are used by the University System of Georgia to determine funding for universities, Whitaker said in a university video.

From fall 2012 to fall 2018 the Statesboro campus saw a 1.75% decline in enrollment, while the Armstrong/Liberty campuses saw a combined 15.77% decline in enrollment over the same time span, according to numbers compiled by Michelle Haberland, professor of history, which were fact-checked by Amy Ballagh, vice president for enrollment management.

This decline in both enrollment and credit hours has caused an $11,958,564 gap in GS’ projected and actual budget for fiscal year 2019, Whitaker said during the meeting in March.

The university has avoided a budget redirection in previous years due to a contingency fund built into the budget, but that fund has run out, Whitaker said in the video.

The university plans to use the redirection to grow and retain enrollment, address the faculty and staff salary survey, restore the annual contingency fund and fund a 2% merit increase for faculty, Whitaker said in the video.

President Kyle Marrero said at Wednesday’s Faculty Senate meeting that USG would fund 75% of the merit increase, leaving GS to pay the other 25%, equal to about $1 million.

The full explanation for the budget redirection by Whitaker can be found in the video below. Note the video was made before the redirection was reduced to 7.5% for academic affairs:

Kyle Clark and Nathan Woodruff contributed to this article.