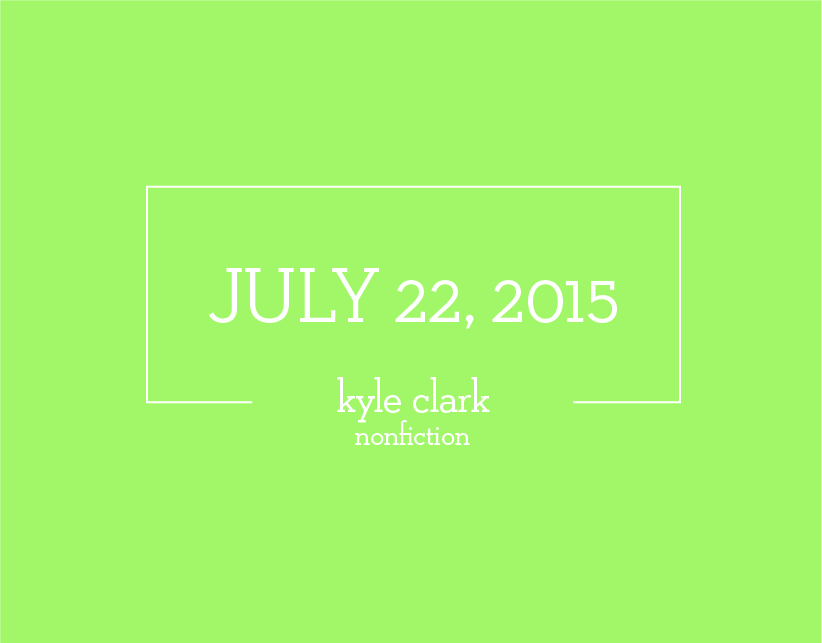 It was one of those hot summer days. A day so hot that the overbearing mugginess clung to you like a wet shirt. Sweat would bead on your brow just from exposure. Just one of those days that made Florida the sweltering peninsula it was known for. It was a quiet day, but not naturally so. It was not the peaceful quiet of a lazy summer day or the sleepy quiet of night. It was a quiet so thick and so artificial you couldn’t help but notice it. It was as visible as the distortion flickering on the horizon.

I was alone with my sister in a room filled with ghosts. Not Jacob Marley and his rattling chains or anything that Zak Bagans would lie about on the Travel Channel, but a more abstract kind of ghost. Ghosts of a time before mine, ghosts that cling to memories, ghosts that haunt your photo albums and diplomas. Ghosts that make you feel things. Those were the ghosts I was dealing with.

The room was once just a “man cave.” It was a room in the secondary building of the property I was at. All along the walls were baseball caps and VHS tapes of westerns and war movies. There was a tube television in the corner with a saggy old sofa planted in front of it. A faulty plastic fish that sang a “Talking Heads” song whenever someone opened the door hung proudly near a collection of fishing poles. And all through the room there were photographs, most of them older than me by a decade or three.

The room belonged to my great grandfather. And July 22, 2015 was the day of his funeral.

The visitation had already happened and everybody else in the extended family was at the funeral or being baby sat in the case of the younger children. The only two living souls in that building were my sister and me. She laid on the palate of pillows and blankets set up in the room, watching who-knows-what or talking with who-knows-who. She wasn’t invited to go to the funeral, but she was just barely old enough she wasn’t relegated to being babysat like my younger brother.

I had been invited.

Yet there I sat, alone with my sister in his room.

The location was nothing new in terms of visits. My great grandfather’s man cave always served as the guest room in a pinch. And on that day, when nobody else was around and thus every other room was open, I was still there. My grandmother’s’ room smelled too much of cigarettes and I couldn’t bring myself to go into the main house. Partially because I hadn’t been offered to, partially because I preferred the ghosts in the man cave. The ghosts in the main house were too raw, too recent. The memories there were tinged in a color I did not like.

Initially I was going to go to the funeral. I had clothes set aside and everything. But it was the night prior that I changed my mind. The family assumed I was too squeamish or simply didn’t want to spend so much of the day doing something so somber. Nobody asked questions, everybody just nodded. There was a lot of nodding.

I wasn’t squeamish, nor did I think the funeral would have been a waste of my time. I’m fairly certain a few people thought it was stage fright though, too. Because I had been asked to write something, a few nice words to say at the funeral. Even back then, my mind was focused on writing, so they assumed it would have been a good outlet.

I had written out the whole speech. It was just two paragraphs, didn’t even take up the whole front of a piece of notebook paper. I had been working on a project about my great grandfather even before his passing, so a lot of the details were fresh on my mind.

And that’s why I didn’t go.

I spent a lot of time in that room of his during our trip to the funeral. I had also spent a lot of time in it the year prior for his last big Fourth of July celebration before his passing. The same celebration I wanted to slap my brother for asking “what do you have on your face PawPaw?” during dinner. The first and the last time I had seen the cancer that eventually took his life. Even back then, when he was still alive at the ripe old age of 89, that room was filled with ghosts.

To me, each photo in that room held some importance. I saw my great grandfather and great grandmother on a date together in a black and white photograph. I noticed just how much the woman my great grandfather loved looked like my mother. I saw him in uniform. I saw shiny medals and commendations from the Navy and Marine Corps. I saw him standing with people I didn’t know the names of next to planes. Each photo felt so fascinating to me. But they weren’t anything I knew. To me, they were ghosts, whispering their story so softly I could barely make it out.

And that night before the funeral, I started to think. Who was I to speak at his funeral? To me, his whole life was just a series of photographs, a chorus of ghosts. The life of Henry McPherson was amazing, but it would have been like me giving a report on someone in history class. There would have been that disconnect, an almost academic filter over it all. And I didn’t want to turn a funeral into a book report.

I think, today, looking back on July 22, 2015, I think I would have liked to go to the funeral. My dumb fifteen-year-old brain should have just said I didn’t want to speak, I should have faked being shy, something like that. Because in the end, I did respect him, and I respect him to this day. He was a hero to a lot of people.

But a part of me is also glad I didn’t go. Because July 22, 2015 is now ingrained in my mind, it’s a part of who I am. That quiet, hot day in a room full of ghosts is one of the most important in my life. Because I sat there, feeling all kinds of empty and melancholy, and I thought. I thought for a long time, I got completely lost in my own head.

I thought back to two summers prior where I helped my cousin put a new tin roof on my great grandfather’s shed. I was never one for manual labor, nor am I to this day, but I spent most of my day working on that roof. And sure, part of it was because I was asked to by my parents, and part of it was promise of payment, but what really kept me going that day, what made me stick it out even as the sun beat down on the hot sheets of metal and I cut myself on the sharp edges wasn’t any of that stuff.

I remember perfectly how he looked that day. He was wearing a blue, sleeveless shirt and a pair of shorts, had one of his many caps on his head and a pair of dark sunglasses. His body was wrinkled with age but his arms still looked strong. And his face wore the most natural smile I’ve ever seen in my life. It was like his body defaulted to that smile, the lines on his face contoured with it perfectly. And when he shook my hand, when the day started and when our work ended, it was a firm, calloused grip. That man was in his late 80s and his grip was more firm than anything.

And I like to think that, if I could go back and give a speech at his funeral, it’d be about that day. That day I spent all of July 22, 2015 thinking back to. The day I spent the most time with my great grandfather, the day I learned what kind of man he was.

Because, of all those ghosts of memory that float around that property that’s now long since been sold, that ghost is mine and his.

Those words would not have been empty.

Kyle Clark is a freshman writing major from Thomasville, Georgia. He enjoys making fun of bad movies, playing niche board games that are too complicated for their own good, and staring at his computer for hours on end trying to find the words to write for his next commission. He works for the George-Anne as a reporter and editor and needs to get more sleep and talk slower.