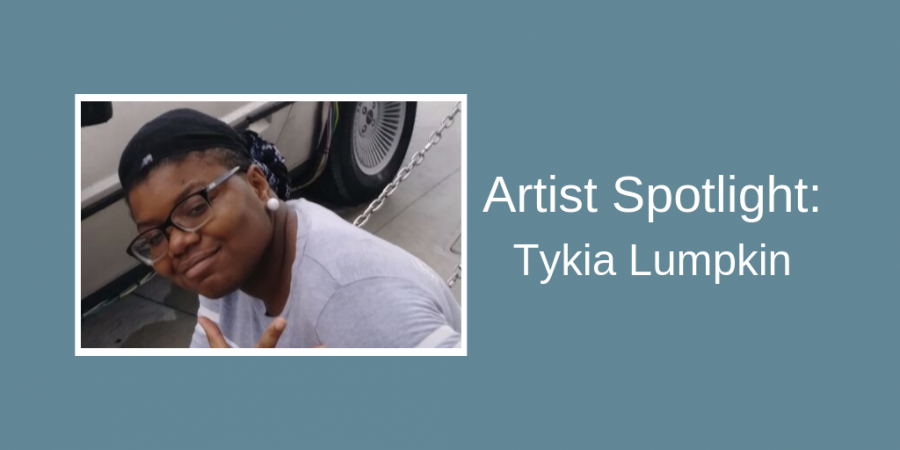 Tykia Lumpkin, a junior biology major from Lilburn, Georgia, said she inherited her passion for art from her mother.

When Lumpkin was young, her mother liked to draw pictures of her relatives, as well as sew, knit and crochet homemade crafts. This inspired her to start drawing from an early age.

Traditional drawing remains Lumpkin’s favorite medium today, but she is developing her skills in digital art as well.

Tykia Lumpkin said her self-portrait (above) is one of her favorite pieces. “I never knew that I could do something like that, and I was especially proud with the shades,” she said.

For inspiration, Lumpkin simply said she uses her imagination.

“I think about weird scenarios, like oh, what if faces were on grapes? What would that look like? Or what if there was a dolphin with really buff arms and shoots lasers out of its mouth and had eyes on its hands? I would draw that, and I would see what that would look like,” Lumpkin said.

Mythology and lore are among Lumpkin’s interests. She said she likes dark or ancient pasts, curses, potions and witches.

Lumpkin’s favorite artist is Afua Richardson, a comic book illustrator who has worked for both Marvel and DC. She said she met Richardson at a convention once and loves her character designs.

“I’m just a big fan of [Richardson]. If I ever turn out to be an accomplished character designer, storyboard artist, et cetera, I would love to be like her,” Lumpkin said.

After she graduates, Lumpkin hopes to attend graduate school to study art further, preferably in film and animation. She also wants to intern at a studio or a company like Cartoon Network, Disney or Nickelodeon.

When asked what advice she has for her peers, Lumpkin said taking the first step toward a goal is often the hardest part.

“The hardest thing that a person can do is try. We always say try your best, or try this or try that, but what a lot of people don’t realize is trying is half of the battle,” Lumpkin said.

To see more of Lumpkin’s art, check out her pieces published on Miscellany, or go to her Instagram, @saucyawkwardness.