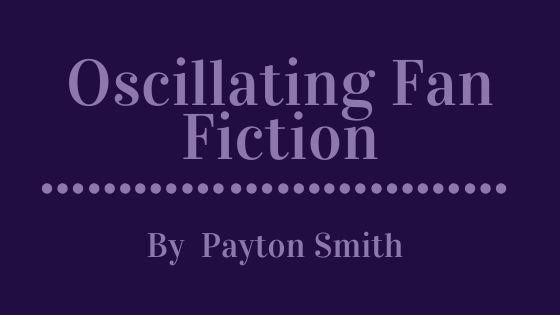 Sitting in the corner, humming his effortless drone, was the fan. His wide base sat at the edge of the rug, and his thin body vibrates with his spinning blades and turning neck. Sometimes, when he was facing just the right way, he could see her. His breeze made her shiver and dance, and the flicker of her fabric was magical. The drapes were the fan’s reason for blowing, but she could never know that. After all, he was a lowly appliance, and she was imported silk. The fan was stuck where he was all day, blowing this way and that, heaving great sighs of loneliness and longing. He wonders to himself what life would be like if he were the carpet, spreading his long arms out to touch everything in sight. Would she notice him then? Or, if he was the armchair next to the window, could he touch her then? He turns again, this time stretching his reach as much as he could, and blew the biggest gust of air towards her, hoping she would notice. The drapes gave a little ripple, acknowledging his efforts and greeting the fan with a wave.

On days like this, he’s happy to be at work, huffing and puffing away for her. Any other time, he would squeak and moan and complain about being plugged in all day. Sometimes, he believes that he serves no purpose. No people even sit in this room half of the time, and when they do, they turn him off because it’s too cold. The fan often just contemplates the reason for his existence. His love resides on the other end of the room, just out of reach. He has no friends to speak with or complain to. His people don’t use him. And yet, he still buzzes away.

Suddenly, he hears the clicking of footsteps coming down the hall. He stands up straight and at attention. The young girl that lives in the house comes in the small room wearing her yellow sundress, with a book in her hand. She hums her own tune as she sits herself down in the armchair and opens up her book. Curious, the fan lingers his gaze at the little girl every time that he passes her by. The end of her dress ruffles up for the third time or so when she finally notices him. Slowly getting up from the chair, the girl gets up and walks over to the fan, unplugging him. Of course, she had gotten tired of him. That’s what they always do, he thinks to himself. But the little girl takes him by surprise, lifting him by his thin metal body and walking him towards the outlet closer to the chair, right next to the window. Right next to the drapes.

He practically laughs with happiness as she plugs him back in, his blades spinning again. The drapes dance next to him in ways that he had never seen before, with his breeze billowing her fabric in every direction. His sighs become content, and the little girl returns to reading her book, blissfully unaware of the new purpose that she had given him. And now, his head turns back and forth once again, looking at the world from a new angle.

Payton Smith is a local poet and Georgia Southern University student
as well as a staff member. She performs spoken word at the Chandler
Hollow Studio, and has a poetry chapbook entitled “Rot and Poetry” in
the process of publication.