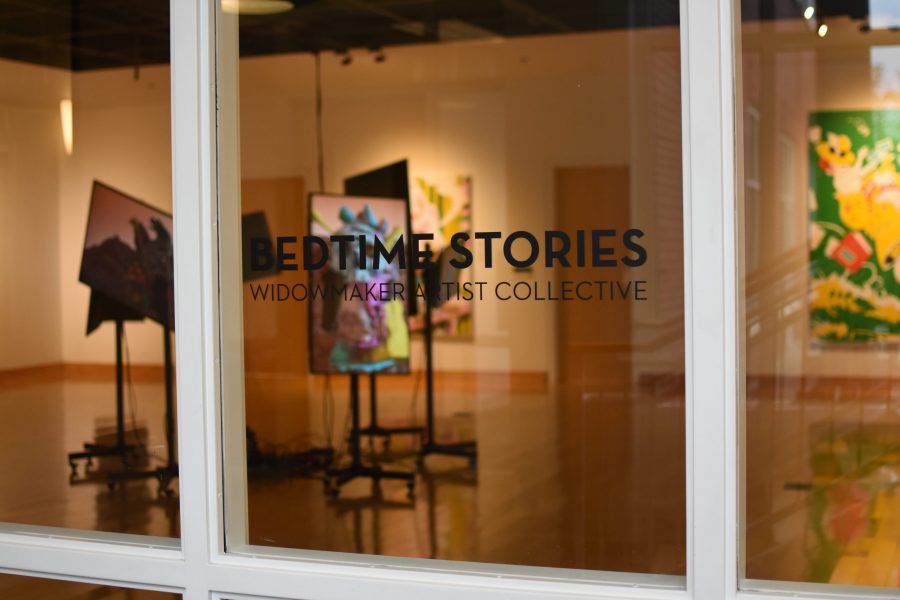 The Widowmaker Collective showcased their work at Georgia Southern’s Center of Art and Theater (CAT) from Jan. 13 – Feb. 7 2020.

The team is composed of three artists: Will Penny, Michael Porten and Britt Spencer. All three were previously students from the Savannah College of Art and Design (SCAD).

Though based in Georgia, their paintings, multimedia work and various nuanced art forms have been displayed internationally for thousands of people.

Their recent artistic collaboration was, in part, prompted by GS’s Jason Hoelscher, gallery director and assistant professor of art, who taught some members of the collective when he worked for SCAD.

“Jason gave us basically free reign to come up with a concept and to try to put something together for exhibition,” said Penny.

The title “The Widow Maker Collective” originates from a twisted yet avant garde studio that the team used during graduate school. Penny experiments with textures, unique configurations of objects and artistic technology in his work. Furthermore, Porten and Spencer both have an aesthetically intense style (really large and colorful)  which in many ways complements Penny’s absurdist textured visuals.

“And so we’re bouncing ideas around for a theme, and we started with the theme of bedtime stories, which we kind of threw out there—it’s very open to interpretation,” said Penny.

Penny added that any of them could take their own route, “whether it was something about nostalgia or about, you know, growing up or about adolescence or you know storytelling in general.”

Penny’s starting point for bedtime stories was him analyzing his experiences, memory and space. With his work in Bedtime Stories, there are a couple of different things happening all at once; there is the video work versus the work on the walls, which incorporate a lot of 3D scans that were found and taken around Savannah using photogrammetry.

“Basically, it’s trying to kind of reassess different parts and pieces; a similar way to how I felt like all of these accumulated images, looking at books and stories and things that kind of shaped my tendencies and aesthetics growing up,” said Penny.

Penny further explained that his Bedtime Stories piece allowed him to take his childhood experiences and wrestle with them in a virtual space.

“I have been working a lot in 3D animation and rendering and basically being able to build your own hypothetical universes or places where you can kind of go,” said Penny.

As opposed to the other members of the collective, Penny showcased his style with both wall art and a 3D digital work comprised of four screens allowing the viewer to observe his accumulation of images from multiple vantage points—much like what was started in the movement of minimalism in which the gallery also works as an interactive theater space.

However, Penny did not say that he would necessarily categorize his work as minimalist. He was heavily inspired by Donald Judd and Robert Morris and the discussions that they were having in the work at that time. The discourse of Judd and Morris is something very much in the back of his head. As much as it is called minimalism, it was more about expanding concerns from painting out into three dimensional space, which Penny particularly enjoys, and the freedom to move around which came with the postmodern art movement.

“There’s definitely, for me, a translation from a painting window, picture space to a physical space that the video work occupies and it’s aware of the presence of the viewer,” said Penny. ” So, there’s a lot of ties to theater and presence that I really like with minimalism especially in terms that in my work . . . you can get ideas and formations of things as you look at it. So, [minimalism] is in there somewhere—I am certain.”