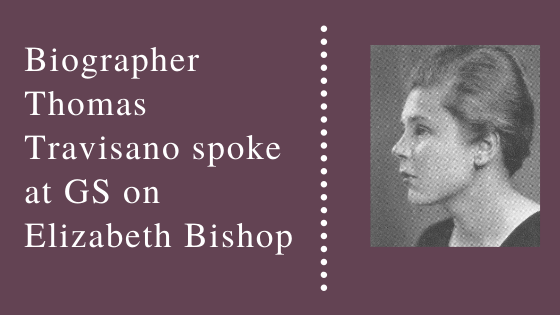 After the release of his biography “Love Unknown: The Life and Worlds of Elizabeth Bishop,” Thomas Travisano spoke at Georgia Southern.

Travisano said he wanted the students to take away from his lecture was the immense value of a biographical interpretation of a writer’s work.

“There’s a strong connection between anyone’s life and their work, and I think in Bishop’s case, you can approach it from so many levels,”said Travisano. “You can read the poems in isolation. You can read them in relation to archival sources. You can also read them in relation to the places she’s talking about. Since she was such a visual poet, the closer you’ve observed the thing, she is writing about the more accurate you realize they are.”

As a Professor Emeritus of English, Travisano dedicated his work to Elizabeth Bishop— a Pulitzer Prize winner for Poetry (1956), a National Book Award winner (1970) and a recipient of the Neustadt International Prize for Literature (1976). Bishop was also argued to be “the most purely gifted poet of the 20th century” by Dwight Garner, a longtime writer and editor for the New York Times.

Even though Bishop has been the object of Travisano’s scholarly attention since 1977, Bishop has never ceased to academically entice him.

“I’ve been working on Elizabeth Bishop for a very long time. She once said that ‘surprise is the most important quality a home can have; every home should surprise you.’ And she’s never lost her capacity to surprise me. And that’s one of the things that’s kept me going,” said Travisano.

Back in 2017, Travisano and his colleagues put together a National Endowment for the Humanities summer seminar on Bishop in which one of Georgia Southern’s very own Professors of English, Richard Flynn, was a major participant.

In said seminar, the Bishop scholars were able to get their hands on a body of Bishop’s personal possessions, including letters, notebooks, drafts of poems, photographs and many other kinds of memorabilia with the help of an assistant from Vassar College (where Bishop graduated from). These are the types of items that really allow a biographer do an in depth exploration of the life of their subject.

Bishop’s sanity is a very important topic when studying her life, as she lost her parents at a very young age, and she was horribly abused by her Uncle, said Travisano.

However, that is not to say that Bishop allowed her trauma to hold her back from her prodigious success as an American poet.

As an adult, Bishop’s friend Robert Lowell was the poetry consultant (which later changed its name to Poet Laureate) for the Library of Congress, a position that was later passed down to Bishop.

Humorously, during her stay in Washington, Bishop’s office had a wonderful view of the capitol building. Thus, she wrote a poem called “View of the Capitol.”

Thanks to Travisano and the Georgia Southern English department, a vast heterogeneity of students were given the chance to briefly peer into the extraordinary world of one of America’s greatest poets.