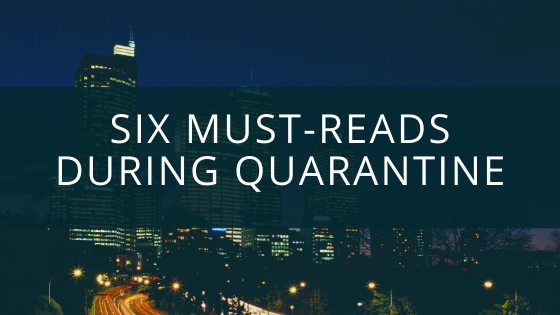 Georgia courses have now made the move to be strictly online, and many people are in self-quarantine,. Along with this new way of life, you may find a lot more time on your hands. If you’re looking for a good book to read or just need recommendations for the future, here’s a list of what all the Miscellany Editors are reading during this self-quarantine!

“The Handmaid’s Tale” is definitely a story that will get you thinking. The novel is a dystopian that takes place in America where the Republic of Gilead has overtaken the country. Offred soon finds herself a victim of this new world, forced into the role of Handmaid. Atwood also just released a sequel titled “The Testaments” in 2019.

While the novel does not make for light reading, it’s a story one must spend a lot of time in, which helps when trying to pass time in quarantine.

Oh, and “The Handmaid’s Tale” is also a Hulu Original show with three seasons and a fourth in the making.

Bailey’s Pick: “Given” by Nandi Taylor

In between the adventures of online classwork and the enjoyment of memes and sleep, I am reading the published version of “Given” by Nandi Taylor. I read the original version online, and I wanted to enjoy the published version of the story I fell in love with all over again. It is about Yenni Aja-Nifemi ka Yirba, a daughter of the chief of the Yirba tribe from the Moonrise Isles (Sha Islands to those that live there) that goes to a prestigious magic school in the land of Cresh to study their magic in the hopes of finding how to cure her father of a sickness none of their healers can cure with their own magic. While applying for entry into Prevan Academy, she meets the dragon-shifter Weysh Nolan, a pompous man who claims that she is his Given (his mate)! As Yenni-Ajani will learn, sometimes the plans we have for ourselves don’t always happen the way we think they are supposed to. This story is all about finding one’s place in the world.

Bodie’s Pick: “Play It As It Lays” by Joan Didion

While trapped inside for the past couple of weeks, I’ve been reading “Play It As It Lays” by Joan Didion. It’s a quick novel that follows Maria Wyeth, an actress struggling with depression, as she plays the hand she’s dealt (there’s a good bit of gambling in this novel). Filled with lying, manipulation, abuse and generally toxic characters, “Play It As It Lays” is a reminder to reassess some friendships while trapped in isolation.

While stuck inside during this quarantine, I have been reading Kingsbane by Claire Legrand. “Kingsbane” is the second novel in the The Empirium Triology and continues in its world of angels, humans, elementals and marques. Loaded with magic and action, the story follows the viewpoints of two women (with a smattering of other characters) living in different times, the same world, and learning to understand the same magic. The time difference invites time travel, which as a general rule I hate (there’s too many possible paradoxes). However, the era difference shakes up the usual story line and makes me wonder how everything will weave together for an epic climax. My favorite character by far is Elianna. She has tons of spunk, sarcasm and toughness matched with a fragile humanity she rarely shows. I recommend this book to anyone craving some high fantasy and characters you can love, hate and walk with.

I’ve been reading “Homies” by Danez Smith. “Homies” isn’t your average book; it’s actually a chapbook, or a collection of poetry. Danez is one of my favorite poets, and this is their newest release — I’ve loved reading, and then revisiting, the poetry over the last couple of weeks. Every time I read one of their poems, I notice or feel something different. It’s a cool experience, and if you’ve been wanting to get into poetry, Danez’ work is a great place to start! If you’re unable to read any of the poetry, look them up on YouTube!

These past few weeks, I’ve revisited one of my favorite authors, Michael Crichton. I’m currently rereading “The Lost World,” the sequel to his hit book, “Jurassic Park.” “The Lost World” focuses on a rescue mission on one of the islands that dinosaurs infest. There are velociraptors, apatosaurs, carnosaurs and even T. rexes, oh my! If scientific horror reads are your cup of tea, then check out both of these books!