The George-Anne Media Group • May 1, 2020 • https://thegeorgeanne.com/21259/miscellany-lit-mag/misc-artist-spotlight/artist-spotlight-annabrooke-greene/ 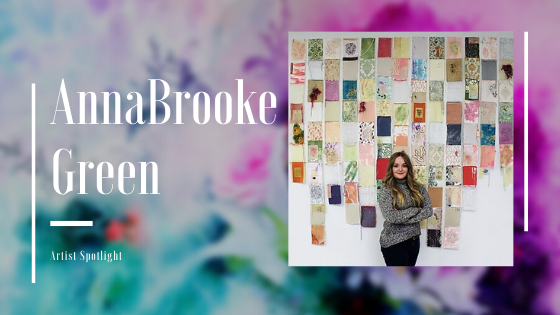 AnnaBrooke Greene, senior fine arts major with a concentration in 2D art at Georgia Southern University, described herself first and foremost as a feminist artist. She believes that this work is so important right now, especially in our current political climate.

She also considers herself as a mixed media artist. The process of creating art is very important in how it affects the work’s outcome. Greene emphasized how it’s very much about the process just as much as the finished work. She likes mixing all different types of materials and bringing them into more traditional mediums, such as portrait paintings, to create a new dialogue.

“For me, it really starts with a concentrated thought, you know, a thematic link throughout all of my work even though I might have various different mediums,” said Greene.

Greene described how she can be making prints or collages, but those start with a certain train of thought, whether that’s representing an individual or representing a certain issue. and then that will kind of lend itself to one part of the process.

As an example, she was doing a portrait series in one of her advanced drawing courses. She had overlapping layers of stitching, paper and fabric that connected back to her topic.

I was representing some real women from my life, and I was studying intersectional feminist theory and just intersectionality, and because of those overlapping identities, I was physically using overlapping materials.

Greene comes from a creative family. Her great grandmother was a medical illustrator, and she noted that being a successful artist for her time in the earlier 20th century was rarer. Greene’s grandmother was into fashion, and Greene describes her mother as a gifted visual art teacher for elementary students.

She originally thought she wouldn’t do anything with art career-wise, but her art just brought her so much joy. In highschool, she started doing competitions and participating in shows, and, while doing an apprenticeship with her art teacher, her teacher really encouraged Greene that it was something she could do as a career.

When she went into college, she started to dive into her art. Greene noted that a question they ask in the art department is “What is your work about?”

“Something that we really talked a lot about in the art department is, you know, you can be really good at what you do, but if your work doesn’t have a statement, your work is not going to last. No one’s going to want to look at your work if you don’t have anything to say,” said Greene. “And that’s when I started kind of diving into the feminist undertones of work that I was making when I was like 15. So it was a really cool journey from where I was younger to where I am now.”

The biggest obstacle she’s had to overcome as an artist is overcoming her fears and holding herself back.

Greene said she was blessed with a strong, supportive family unit.

“So I think if anything, I am very lucky,” said Greene. “And I kind of acknowledge, like, some privilege that I’ve had in my life to get me where I am today.”

Greene’s thesis, some of which she submitted on Miscellany, explores how visual language is associated with femininity.

“I’m looking at kind of stereotypical, or traditional feminine images or feminine iconography or feminine patterns, and trying to use those as a tool to not only talk about women’s issues that we deal with today, but also just celebrate women in general, and kind of showcase their differences and the diversity of what femininity does mean in our contemporary society,” said Greene.

She also has been featured in numerous exhibits since the start of 2015, including Earth/Mother, Third LaGrange Southeast Regional Exhibition and Social Unity.

“I’ve worked really hard, and I’m very lucky for the kind of acknowledgement that I’ve received inside my department, and I really couldn’t do it without, you know, just my amazing mentors and faculty and supportive peers,” said Greene.

Greene said she’s always trying to engage in the very large networking of the artistic community. She was the Co-Curator of “Pop of Color,” an exhibit showcasing artists of color at GS, and the President of the Print, Paper, and Book Arts Society.

Greene primarily draws inspiration from the women and artists she surrounds herself with. Greene also said she has an amazing support system of professors, and she loves learning from and developing a relationship with them.

“I love my work and I really think that there are really some hidden gems in the Betty Foy Sanders Art Department here at GSU. I mean, I never really would have chosen coming here if it hadn’t been for meeting the professors…but I just I’m really thankful, you know, for all of the relationships that I’ve had in school in general, even my [writing professors]…they’ve all really like changed my life when it comes to, you know, what I’m going to continue doing as a career. So I’m really thankful to that,” said Greene.

Greene stresses the importance of research when it comes to art.

You have to look at what has come before you so you can…find your place in the art world.

She is inspired by bell hooks, a feminist author, and artists such as Kehinde Wiley, Jessica Watts and Elizabeth Castaldo.

“Everyone says to be original, but the fact is…someone else has done that before or kind of had a similar thought before kind of,…[or] experimentation before when it comes to mixing their media,” said Greene. “So it’s so important to do research and kind of look at those other artists. What can you learn from them? Because you really can’t make powerful conceptually or literally well-made work without that element of research—like that research is just so important to making your work strong.”

One artist Greene takes inspiration from is Ghada Amer. Amer creates string paintings. Greene describes the painting as a little provocative but showcasing women and the women’s body in a positive, self-reclaiming light.

“I started using string in my paintings…but you can’t kind of do stuff like that without looking about the artists have come before you, what they’re doing successfully and how you can incorporate that into your work in a way that is your own take on it,” said Greene.

Greene has accepted an offer to earn her master’s degree at Florida State University. She notes that she definitely wants to continue to stay active in her community wherever she is. Greene particularly wants to be a part of  galleries like P.P.O.W or specific women’s galleries that are focusing on feminist artwork.

I really think that, you know, the political climate that we have, just our world right now in general, that this kind of work is really important, and we won’t see cultural change without all different areas of life, including art, showing that change.

See more about Greene, her artwork, and her accomplishments here.