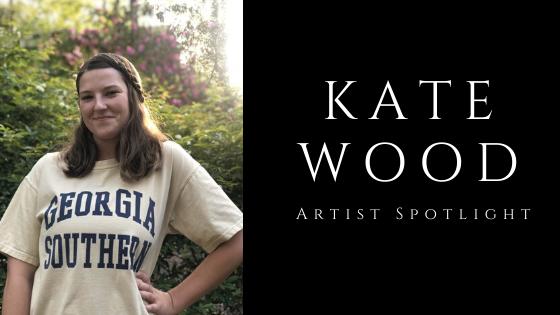 “I had to take a creative writing class to fulfill the major, so I put it off for a while because I was pretty scared of it,” said Wood. “I didn’t think that was my wheel house and then I finally took it my sophomore year…and I was like, ‘Oh, I can actually do this. I like doing this. It’s not what I thought it was at all.’ So then that kind of just sparked to the whole thing.”

She had to overcome the mindset that she didn’t think she was a writer. She said that, although she journaled as a kid and wrote essays for high school, she never really considered herself a creative writer. She had to come to the realization that creative writing was something she was capable of doing.

When she started to let herself write creatively, she realized that she had a lot that she wanted to say. In her creative writing class, she was so overwhelmed at first because she didn’t know where to start.

“I realized that, throughout my whole life kind of, I’ve had things that I wanted to say, and I just didn’t have an outlet for it, I guess,” said Wood. “That’s kind of where it [her passion for writing] started from and then as I learned more about the craft itself. I could morph what I wanted to say with other things and incorporate other elements. I’m still working on building that up.”

Wood said she writes about universal themes that more people can relate to, but that also bogged her down for a little bit because she didn’t think she had any universally inspiring things that have happened to her.

“I’ve kind of gone by the mantra, well, I would want to read about this because I am me,” said Wood. “So I write about things that I’m interested in.”

Wood has written an essay about “The Office,” and she also wrote an essay comparing Joe Exotic from “The Tiger King” to Steve Irwin because she thinks it’s interesting.

So just kind of embracing the fact that other people may not care, but I want to write about it, and I want to explore it for myself, and that’s more than enough reason why.

Wood has worked for the University Honors Program as an editor. She also wrote for a nonprofit homeless shelter in the Summer of 2019 and has interned with Statesboro Development Authority.

“It’s been pretty cool being able to explore all those realms too, and I think I feel accomplished, just having dove into creative writing at all. That was a big turning point in my own life.”

Wood also wrote a short story collection from the perspective of seven women who have been overlooked by history for her honors thesis.

“I did very extensive amounts of research and figured out who I wanted to write about, and I wrote biographical fiction perspectives of these different women. I got to use a bunch of different forms, which was really cool. It was very challenging…It was very rewarding. I’m very happy with how it turned out.”

Wood found an overwhelming result of overlooked women in history.

“I was trying to find an overarching connection between them and that’s when I decided to do the geographic limitation by picking one woman from every continent so that way I could at least narrow down a little bit. From there, I picked the people who were most interesting to me that I would most like to learn more about.”

Wood takes inspiration from all different art forms. Shereally enjoys television, and she’s done a deep dive into the writers of “The Office,” which led her to a lot of podcasts about the show.

“I’m kind of lowkey obsessed with Michael Schur who wrote and created ‘The Good Place,’ but he also worked on ‘The Office,’ ‘Brooklyn Nine Nine’ and ‘Parks and Rec’ which are all of my all time favorite shows ever.”

Her short story “High Beams” was inspired by one of the Scary Stories to Tell in the Dark. She describes it as an urban legend kind of thing about a guy that crawls into the backseat of a woman’s car, unbeknownst to her

“I just thought about it one day, and I was like ‘how did they know she didn’t know?” said Wood.

Wood is planning to pursue a career in professional writing. Her ultimate goal is to work as a writer for television.

You just have to write to figure out what you want to write about…You have to write yourself into and through everything that you’re thinking of and then revise and edit the hell out of it. And then eventually you’ll have something for other people to read.