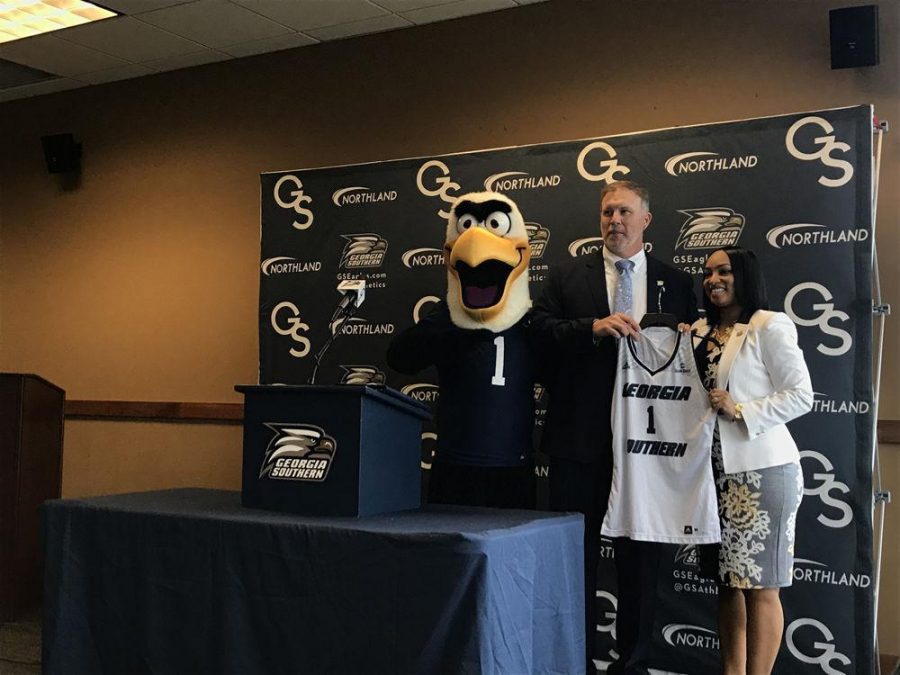 Georgia Southern Athletic Director Tom Kleinlein presented Howard with a No. One jersey which had her name printed on the back.

The press conference was kicked off by a few words from GS Athletic Director Tom Kleinlein as well as a presentation of a jersey with Howard’s name printed on the back to make things official.

As the eighth women’s head basketball coach hired Howard is ready to put the Eagles back on the winning side of things following former Head Coach Kip Drown who only lead the Eagles to a 32-86 record.

“I don’t like losing, and I know everybody in here is saying ‘coach, nobody likes losing,‘” Howard said. “But I’m like allergic to losing. I don’t plan on starting to continue to lose here, so I’m going to do everything in my power to bring in a coaching staff that is off-the-chain, bring in some strong recruits to go along with the returners that we have.”

Howard made it clear she was ready to “shock the Sun Belt” by turning the program around and she’s prepared to put in the work with the girls as she already had their first practice set for later that day.

Howard has evidence to show she’s more than capable of leading a successful team as she was coaching at Columbus State prior where she lead the Cougars to a 66-25 record during her three seasons as well as leading them to a NCAA DII Elite Eight appearance in the 2016-17 season.

Prior to the press conference Howard was able to sit down with the team and talk about expectations for the season as well as her hopes for the girls.

“We actually got to laugh a little and then we got down to business and talked about what the future holds for Georgia Southern women’s basketball,” Howard said. “The biggest thing I talked to them about is the belief that they can do it, and to trust me and what we’re going to bring to the table.”