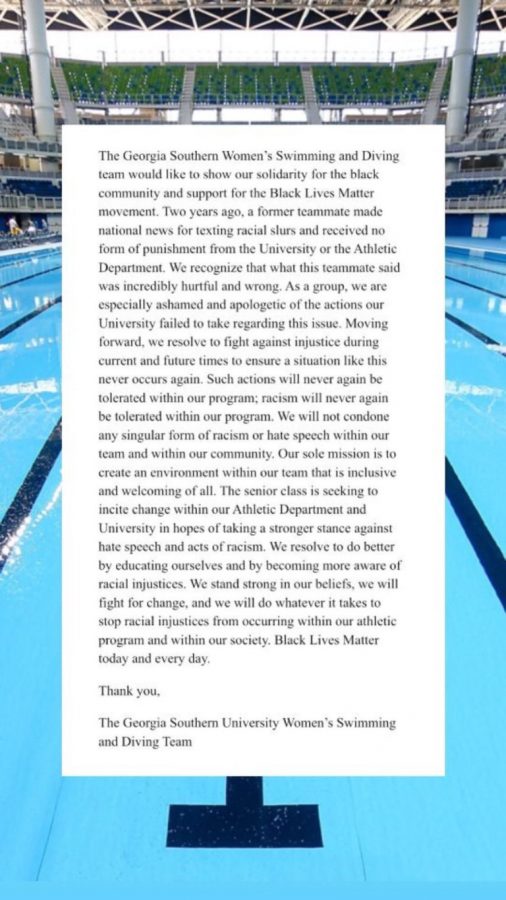 “The Georgia Southern Women’s Swimming and Diving team would like to show our solidarity for the black community and support for the Black Lives Matter movement,” the statement reads. “As a group, we are especially ashamed and apologetic of the actions our University failed to take regarding [the “Triggerish” incident]”

During the summer 2018 semester, GS garnered national attention after screenshots depicting Courtney Schaefer, a GS swimmer, using the N-word in a message to her future roommate, a Black GS student, went viral.

“Georgia Southern Athletics condemns hate and bigotry in any form and does not endorse, condone, or in any way exert control over posts or statements made by students who are not authorized to speak for the institution,” Johnston said. “The department and Athletics Director Jared Benko has made it clear where we stand on these issues and the steps we are taking going forward to provide for a more inclusive environment.”

The lead on the statement was taken by the team’s senior class, according to Swim Swam, the outlet who first reported the statement.

“The members of our team all feel strongly about this incident and the support of diversity and decided it was time to take matters into our own hands,” Elizabeth Chemey, a former GS swimmer, told Swim Swam. “Our goal is to set the standard for an inclusive culture on our team and show that as members of this team we are sorry for what happened and want to do better within our program and within the community.”

The George-Anne made repeated attempts to contact current GS women’s swimmers and divers. They referred us to Johnston’s office for comment, claiming they could not speak on the statement without permission from their team and/or the athletics department.