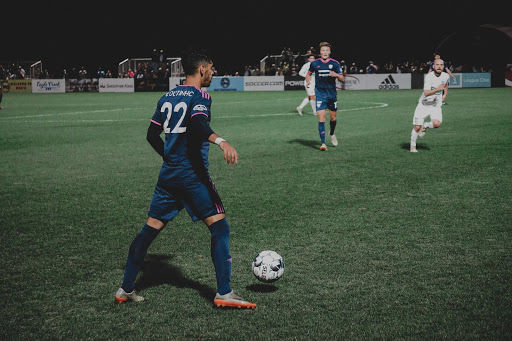 Midfielder Lucas Coutinho (22) scored the equalizer for Tormenta, allowing that to be his first professional goal.

There was no pomp and circumstance, no hot air balloon or magenta smoke. The sellout crowd from the season opener was absent. But on the field, the tactical play of Tormenta FC raged on with a 3-1 rout of FC Tucson to improve to 2-0 on their first season in USL League One.

“We talked about relying on discipline and not emotion,” Head Coach John Miglarese said. “Friday night felt like a final and today was the first game of the real season. I think tonight we were more measured, more composed and looked more experienced.”

The Ibis were down for the first time in the young season, after a goal in the 55th minute gave Tucson a 1-0 lead.

Antley drove down the right side of the box. Fighting off a defender on his right, Antley turned to find a wide-open Coutinho who buried the ball in the back of the net to level the game at one.

Just moments after the team swarmed Coutinho for his comeback efforts, Alex Morrell scored his second goal of the season to give Tormenta its first lead of the night.

“The game really needed a goal and unfortunately we gave one away and it gave us some life,” Miglarese said. “Credit our guys. We conceded a goal and popped two right back in their mouth.”

The crowd of just over 1,500 wasn’t much of a factor all night, even after the two goal barrage, but its spirit was lifted when the third and final goal of the match came.

Mario Micaletto worked the ball in open space to the right side with one Tucson defender on him. Micaletto juked out the defender and fired a rocket with his left foot into the top left corner of the goal with ease.

After his first professional goal, Micaletto ran across the field, jumped the barrier and climbed into the stands to hug his mother. The Italian was awarded a yellow card for his prolonged celebration.

The fans that remained cheered louder than they had all night, giving the team the momentum they needed to close out the Wednesday night match.

“When a team concedes a goal, you learn a lot,” Miglarese said. “We learned really quickly by getting popped in the mouth, put the ball down and put two back in. I think that shows a lot of the character that is in this group.”

Now at 2-0, Tormenta will hit the road for the first time in 2019 on Saturday to face the Richmond Kickers. As far as facing another challenge like the first deficit, Coutinho is confident is team has the mindset to overcome it.

“We know adversity is going to come,” Coutinho said. “We’re going to get scored on first, we’re going to lose games, but sticking together is what we do.”