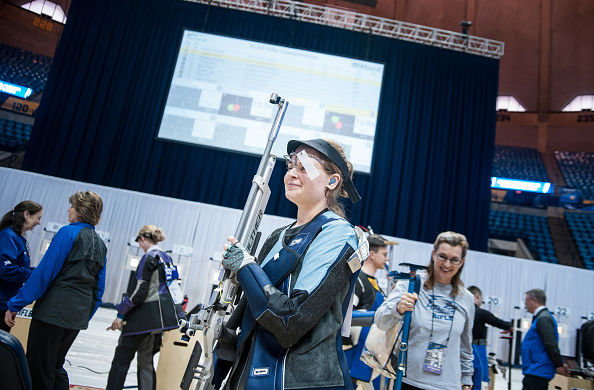 Senior markswoman Rosemary Kramer ended her time at Georgia Southern in soaring fashion, becoming not only the first Eagle to qualify for the NCAA championships, where she would finish third, but also becoming the first All-American in the program’s six-year history. But Kramer almost didn’t come to GS, and her story as an Eagle almost didn’t happen.

Hailing from Culloden, Georgia, Kramer comes from a family where shooting was a way of life. Her mother, Whitman, shot pistols in high school, and her father, Kevin, was a member of the club rifle squad at West Virginia University. The senior talked about life growing up and how the thing she became so good at started as just a fun activity.

“My family always kind of taught us about shooting and made sure we were aware of the safety and discipline of it,” Kramer said. “So I did it a lot when I was a kid, from deer hunting, to just go shoot balloons and tin cans just to have fun with the family.”

It wasn’t until she reached high school that Kramer realized her talent at the sport. She shot the highest score ever recorded at her high school, Upson-Lee, in a tryout for the team. In her junior and senior seasons, GS’ most elite markswoman appeared in nationals twice, finishing in the top 10 on both occasions.

As is the case for many collegiate athletes around the country, Kramer’s career as an Eagle almost didn’t happen- she originally planned to go to Columbus State University.

The president of CSU cancelled the rifle program the day before Kramer was set to sign her letter of intent. The cancellation left her scrambling to find another option, but thanks to what would’ve been her head coach, the senior was pointed in the direction of GS. The rest, as they say, is history.

Just a brief look at Kramer’s awards and honors helps paint the picture of how great her career has been. She is a three-time selection to the First Team All-SoCon Air Rifle honors, being named to the list every year from her sophomore season on.

Not only is Kramer the first All-American and NCAA medal winner in program history, but she also owns each of the top-10 all-time highest air rifle scores and seven of the top-10 highest aggregate scores in school history. Kramer will likely go down as the best student-athlete in women’s rifle program history.

When asked about her favorite moment as a member of the rifle team, Kramer talked about the unlikely victory at the 2017 Air Rifle Championship at the Citadel, alluding to just how big it was for her and her teammates.

“That was just huge for everyone,” Kramer said. “Everything about it was great, we were not expected to win, we didn’t expect to win, but we did. And the whole time the other coaches were like trying to check the scores and make sure it’s right because there’s no way that we won, but we did and we’re really proud of it and we stuck with it and got it again this year.”

The team has seen exponential growth since the arrival of Head Coach Sandra Worman in 2017, helping Kramer and the squad reach their potentials through a more mental approach of the sport.

“We had a lot of planning this season,” Kramer said. “From the start Coach [Worman] got us some really great resources and was a great resource. She told us about all these different ways and tactics to plan for with mental management, so we were able to do positive visualization, imagery, just all this kind of stuff, meditation to prepare our minds for being in a situation that was stressful.”

Preparing for stressful situations is part of why Kramer is where she is today, as she’s taken the mental preparation to heart as opposed to the physical aspect of preparation.

The senior explained that while most athletes will practice their shooting five, six days a week, her approach is much different. Instead, Kramer would shoot once, sometimes twice a week, while spending the rest of the time getting her mind right.

While the experienced markswoman leaves GS with countless impressive records, she knows the program is in good hands. She’s watched it continue to grow since her arrival to Statesboro just four years ago.

When asked about what it’s been like to see the team continue to improve during her time as a member, Kramer described the feeling as “amazing” and “uplifting”, while stating that the team is on a good path.

“I know that in the next few years, because of the impact that my team has made, that we are really gonna send [the program] places,” Kramer said. “People are going to come from all over the country to shoot here and to be a part of the program.”

As if Kramer’s accomplishments as an Eagle weren’t enough, the senior biology major has her eyes set on taking her talents to the World stage, already having multiple upcoming international events.

Kramer already has a full summer booked, with plans on traveling to Germany in May for the Munich World Cups, followed by Nationals in Fort Benning, Georgia in June and the World University Games hosted by Italy in July.

The international stage will prove to be challenging, as these trips mark her first time leaving the country. In August she’s planning on moving out to Colorado Springs, home of the Olympic Training Center with dreams of gold medals on her mind. If Kramer does well in the different events she participates in, Georgia Southern could have an Olympic athlete come 2020.

But whether or not she qualifies for the Olympics, Kramer is determined to finish her time as a GS student by graduating with her degree in biology in the fall of 2020.

By coming to Georgia Southern in what was an afterthought, Kramer has etched herself as one of the most impressive student-athletes in the annals of GS alumni past and present, while showing what it truly means to be an Eagle in the process.