How bad is the mold problem in on-campus dorms? 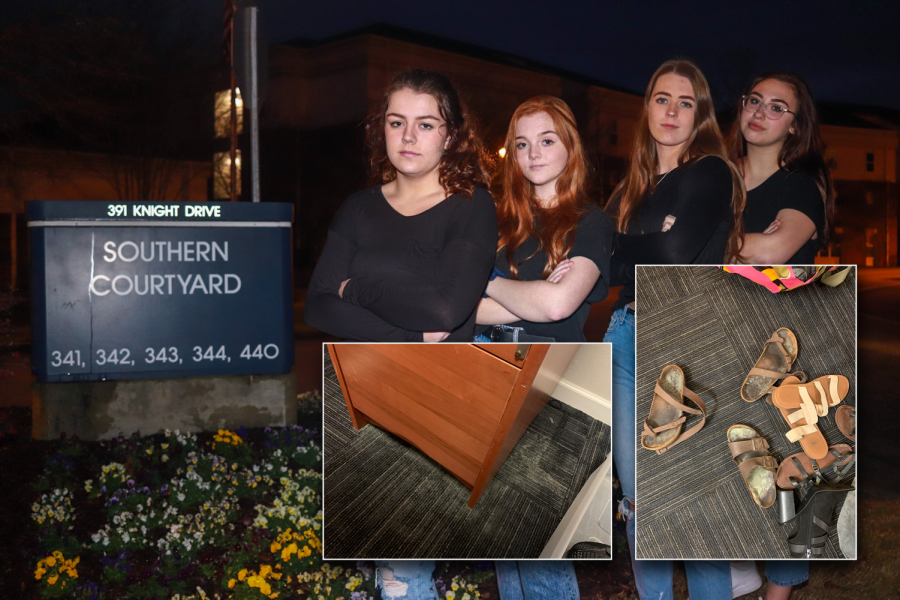 STATESBORO —  Four former on-campus residents say the mold problem in their apartment forced them into temporary housing for 91 days. Our investigation found dozens of mold remediation cases and nearly $100,000 spent during one academic year.

During the 2018-2019 academic year, on-campus residents submitted 138 work orders related to mold. 84 of them resulted in some form of remediation, according to university documents obtained through the open records act.

That’s nearly double the remediation cases that The University of Georgia had in the same time period. They had 43 according to a UGA spokesperson. UGA also serves more than double the amount of on-campus residents compared to GS’ Statesboro campus.

Over the summer, GS announced it would spend an additional $16.4 million to get Kennedy Hall back on line to serve students.
Southern Courtyard 2217
Taylor Bartlett, Daryl Demarest, Hannah Scime and Grace Thornton began to notice their dorm, Southern Courtyard 2217, was humid and had a very distinct smell.

Over a rainy weekend near the end of October 2019, their mold problem got very serious very quickly. The smells got worse, humidity was at an all time high and visible mold began to appear all throughout the dorm. The women alerted the resident advisor on-call who came to check on their room.

“[The RA] came and looked at it with the maintenance guy, and they said, ‘Well try and sleep in here for tonight, and we’ll figure out what to do with you by tomorrow,’” Thornton said.

The women decided, instead, to stay in a local hotel for the night until university housing could investigate.

Formal testing took place until Oct. 31, 2019, according to university documents. However, an inspection by university officials revealed unsafe living conditions. The residents were split up and moved into two Centennial Place shared suites.

The first air quality test was performed in their room on Nov. 4, 2019. That test revealed 4,100 spores per cubic meter of air, according to university documents.

The subsequent tests in the students’ room indicated continued mold growth.
Former residents report illness and lack of communication
All four residents reported medical problems from living in their old room. Bartlett and Thornton, however, were the only two to go to the doctor for their symptoms.

Thorton visited GS Health Services just three days prior to the initial identification of mold. She was diagnosed with an acute upper respiratory infection, according to her medical records she provided to The George-Anne.

When pressed if university housing is aware of any other student’s health conditions in relation to mold problems in their room, Peter Blutreich, executive director of university housing, said, “Medical information is protected. We do not keep record of student concerns regarding their health as it relates to their living environment.”

Brian DeLoach, M.D., medical director for GS Health Services, advises anyone who thinks they have symptoms from living with mold to contact Health Services or their primary care physician.

The women also described a lack of communication from university officials and possible move-in dates repeatedly getting pushed back.

“They had told us that we’d be back before Thanksgiving for sure,” Scime said. “Then after Thanksgiving for sure, then before Christmas break for sure and then after Christmas break for sure, for sure.”
Southern Courtyard 2205
Just two doors down, then-residents of 2205 began noticing visible mold in their own room. The first air quality test, performed on Jan. 8, 2020, revealed 37,000 spores per cubic meter, according to university documents.

“[The dorm] had extreme quantities of indoor type mold spores,” Shelton said. “The humidity levels were extremely high and was conducive to the amplification of mold growth.”

Shelton reviewed the air quality tests from both rooms and agreed with all but one: the final test. According to the report, zero spores per cubic meter were found. He said he’s skeptical.

“I have never [seen] this anomaly [in any] of the thousands of inspections I have completed during my 10 years as a mold inspector,” Shelton said.

Kelly Close, director of environmental health and safety, was made aware of Shelton’s statement and confirmed the use of air scrubbers for over 24 hours, a possibility Shelton noted as to the zero spore count.

“The consultant did not note any anomalies in the report,” Close wrote in an email.
Their 91 days in limbo were over
After three weeks of remediation work on Southern Courtyard 2205, the room was released and considered safe by GS officials.

Bartlett, Demarest, Scime and Thornton quickly jumped on the opportunity to move back into anywhere besides their Centennial Place shared suites.

“Honestly, we wanted to be back where we could all be together and have the same space we had before,” Thornton said.
Why is GS’ mold problem so bad?

Some may attribute GS’ mold problem to the Bulloch County environment. Atin Adhikari, Ph.D., associate professor of environmental health sciences and a specialist in mold, disputes those claims, citing a project a former student of his completed in 2016.

In 20 Statesboro homes, the average spore count was less than 200, according to the project.

“There are no federal limits for mold or mold spores,” Close said in response to the student’s project. “The air sampling reports you reviewed followed remediation efforts in university housing apartments with visible mold growth.”
Is university housing safe?

Close agreed, adding, “More than 4,700 students live in university housing, and we work diligently every day to ensure their safety and their success.”

“If any student has issues with their room and the conditions, simply submit a work order… the university works to quickly address any student issue, and keep them apprised of the progress and solutions to their concerns,” added Blutriech.

Bartlett, Demarest, Scime, Thornton and the former residents of 2205 now live off campus. Currently, both rooms are occupied by other students.

Editor’s Note: This investigation began in February 2020 and was completed in March. Due to the COVID-19 pandemic, The George-Anne opted to hold publication of this story until face-to-face instruction resumed.

To view some of The George-Anne’s previous reporting on mold in on-campus dorms, click here and here.