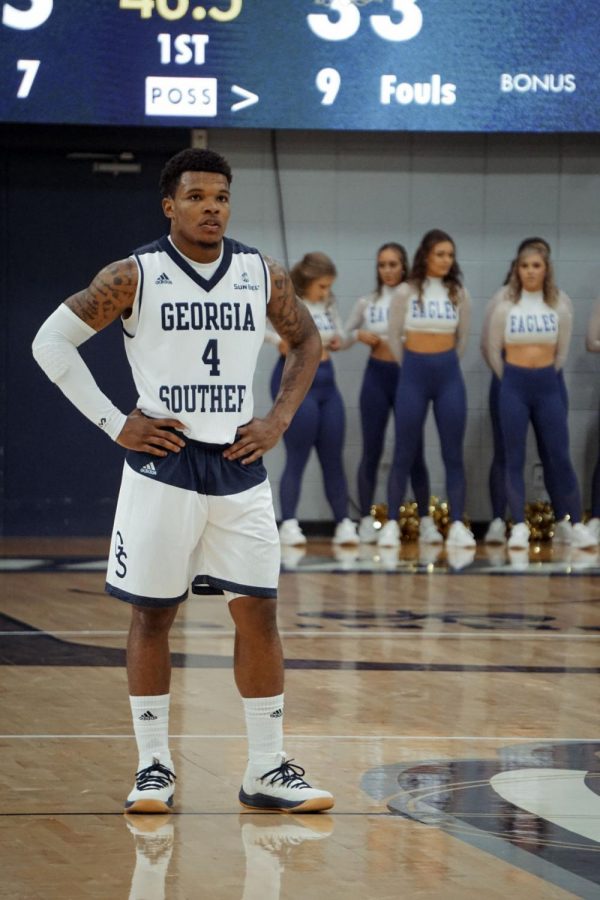 Georgia Southern standout point guard Tookie Brown officially declared for the NBA draft on April 12 on his Twitter page with a highlight video captioned “#4 OUT!” Since then, the tweet has received hundreds of likes and he has received national recognition.

Leaving GS with four first-team All-Sun Belt honors, an Associated Press All-American Honorable Mention, 2019 Men’s Basketball Sun Belt Player of the Year, and as the all time leader in GS points and assists among other honors, Brown has definitely left his mark in Hanner Fieldhouse and the record books.

Brown was recently invited to play in the Portsmouth Invitational Tournament in Virginia, where he was one of 64 seniors chosen nationwide to showcase their talents in front of NBA team representatives. NBA stars such as Scottie Pippen, Tim Hardaway, and Jimmy Butler have all played in this four-day, 12 game tournament in the past.

With the help of his agent, he is ready to enter the murky waters of the draft process. This is not the first go-around for Brown, though. Last year, he declared for the draft as a junior but eventually changed his mind and withdrew his name around late May. His reasoning was simple, he wanted one more chance to get a Sun Belt Championship. The team was eventually defeated by University of Texas-Arlington in the semifinals of the tournament.

Brown is confident in the team he’s leaving behind, especially with the new class coming in. He mentioned that there will be a few junior college transfers next year. This veteran roster is only adding in two freshman. With GS racking up at least twenty wins in the past two seasons, there are already high expectations.

“They’re gonna do great things next season,” Brown said. “Coach B is a great coach and he’s going to get them to the championship.”

Brown’s parting message for the team is to persevere through the hard times and stay united.

“There’s going to be some games where, I mean, you’re going to struggle,” Brown said. “You’re gonna struggle and have bad games, turnovers, stuff like that. You just have to stick together as a team.”

Besides pursuing a professional basketball career, Brown wants to focus on helping kids and athletes around the community.

Graduating with a sports management degree, there are many pathways he could take. In addition to a plethora of coaching jobs in the field, many universities and pro teams hire sports managers to balance the high number of athletes coming in and out. He could also take the more technical route and become either a sports statistician, agent or a contract negotiator.

While his accomplishments on the court are definitely impressive, Brown is also proud of the relationships he’s built with the coaching staff, students, professors, and other student athletes across the board here on campus.