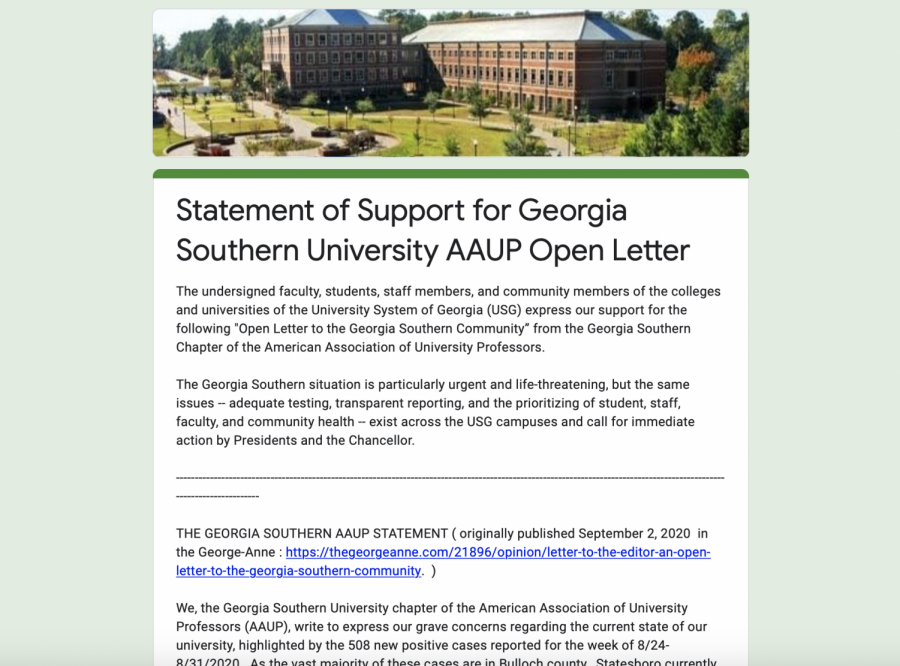 STATESBORO — Since the publication of The American Association of University Professors’ (AAUP) letter criticizing Georgia Southern’s COVID-19 response, 260 faculty members of 13 different universities and colleges have signed a statement of support, supporting their demands of fully remote learning, increased transparency in testing data and expanded coronavirus testing for the Georgia Southern community.

“The Georgia Southern situation is particularly urgent and life-threatening, but the same issues — adequate testing, transparent reporting, and the prioritizing of student, staff, faculty, and community health — exist across the USG campuses and call for immediate action by Presidents and the Chancellor,” said the statement.

The statement of support can be found here.

Since penning the letter, Georgia Southern officials have not reached out to any members of the organization.

“The university has not reached out to any of the current AAUP officers, nor have they contacted me,” said Rob Yarbrough, associate professor at GS, current member and former president and treasurer of the AAUP.

“This coordinated, statewide action on behalf of employees, students, and alumni in the [USG] is incredible,” wrote Leticia McGrath, assistant professor at GS, on Twitter.

“I have signed this petition, and I hope my colleagues, students, and fellow members of the communities of [USG] institutions will do the same,” Jordan Dominy, associate professor at Savannah State, tweeted.

In the letter, the Georgia Southern chapter of AAUP urged the university to request University System of Georgia Chancellor Steve Wrigley to shift all instruction to fully-online.

“It is not hyperbole to suggest that the lives of Georgia residents living in these locales are in the hands of USG Chancellor Wrigley and the Georgia Southern administration,” the AAUP said in the letter

The letter requests more flexibility in how professors teach their courses, asking that accommodations be extended to students and faculty who feel unsafe being on campus rather than just those with medical documentation indicating them as high-risk.

“This micromanaging of faculty teaching by the University System of Georgia enforced by the Georgia Southern administration serves as both a threat to public health and a violation of academic freedom,” said the AAUP.

“We hope that the reporting will soon display critical data including the number of persons quarantined and percent positive test rates,” the AAUP said.