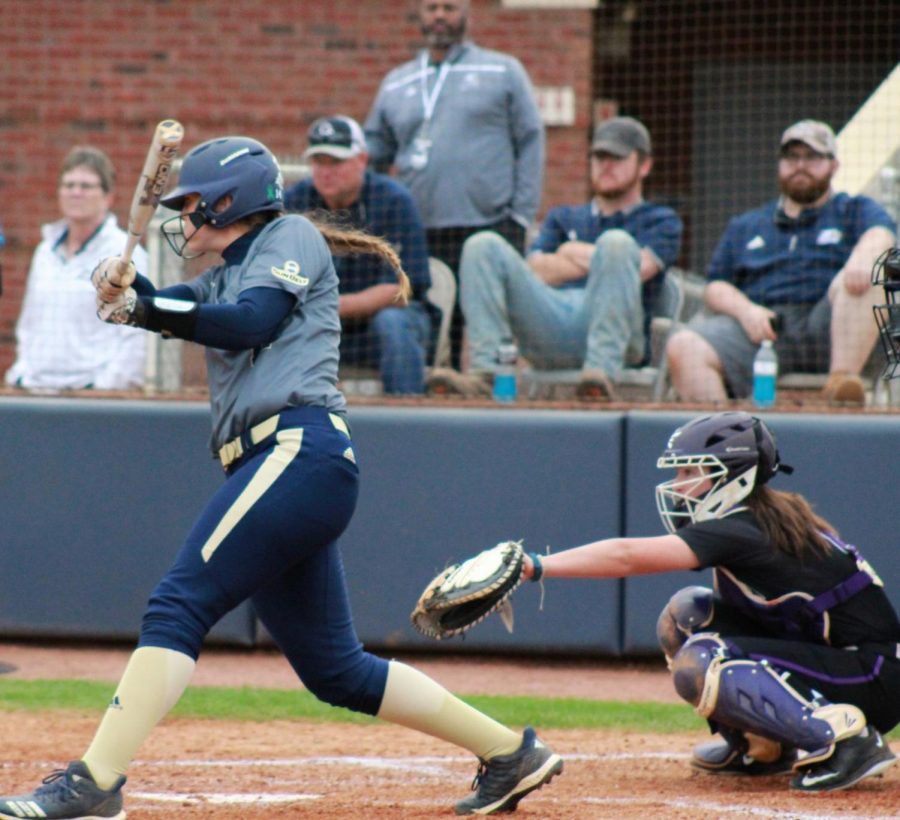 After the series loss, the Eagles are now looking at a conference record of 5-15, and sit overall at 19-24.

The Georgia Southern softball team was not able to pull out a win this weekend against Texas State in a three game home conference series.

Due to weather, GS took on the Bobcats in a doubleheader on Thursday with the finale on Saturday morning.

In the series opener, both teams did not heat up until late in the game. Going into the seventh inning, the Bobcats held a 3-0 lead from multi-inning singles. They solidified the win behind a big, four run seventh. GS got on the board in the last play of the game with a two out double RBI by senior infielder Logan Harrell. The final score was 7-1.

In the second game of the night, GS brushed off the first loss and took an early 2-0 lead, thanks to freshman Jess Mazur. State ended up overtaking the scoreboard in the fifth inning due to Eagle error. Senior infielder Hannah Farrell evened the score at 3 at the bottom of the fifth, but the Bobcats responded with two more runs to take the 5-3 victory.

Saturday morning, Head Coach Kim Dean enacted a new game plan for the series finale. Down by one in the second inning, senior shortstop Macy Coleman hit a two run home run to put GS in front. A few Eagle errors on defense allowed the Bobcats to retake the lead and cap off the series sweep with a 4-2 win.

Though it was a loss, Dean was satisfied with the amount of energy in the team performance. Senior pitcher Kaylee Ramos took her first loss of the season but had an issue with a few illegal pitches.

“I’m more proud of the fact that Ramos fought through it,” Dean said. “Overall, just more impressed with Ramos being able to overcome that, than really getting frustrated with the umpire doing his job.”

With three more losses in the books, GS falls to 19-24 and 5-15 in the conference. There are six more games before the tournament, and Coach Dean knows that this last stretch will be tough.

“We just gotta commit to winning,” Dean said. “Six games left in conference, it’s gonna decide if we go or not. It’s just about really being okay with the pressure of winning because they’re gonna feel it for real now, because we can’t take any more losses.”

She believes that the team must depend on constant communication and a strong work ethic to get through these last few games.

The team will be back in action against Kennesaw State University on Wednesday at 5 p.m. on Eagle Field.