Students share their thoughts on Paulson during a pandemic 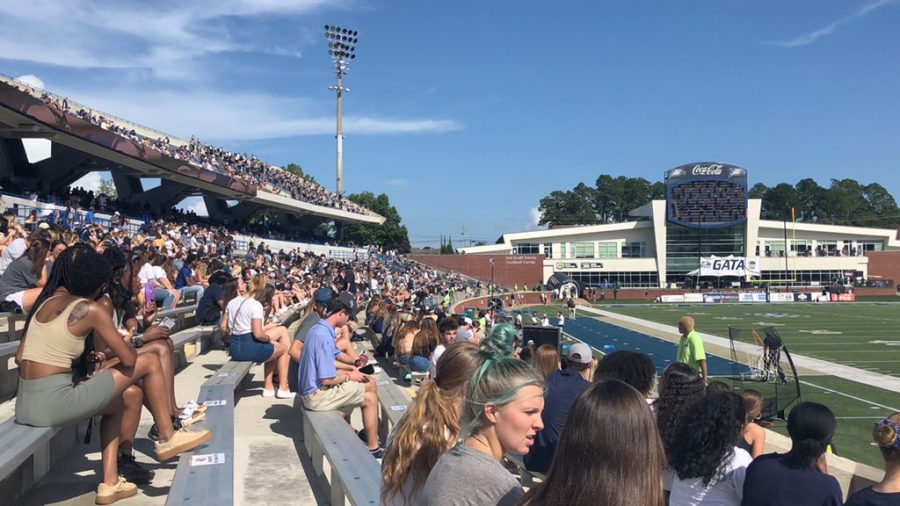 STATESBORO — When Georgia Southern announced that capacity at Paulson Stadium would be reduced to approximately 25% of its normal capacity, many fans thought it would be a big difference in the typical Eagle game day atmosphere.

From the time fans started piling in the stadium, the passion that Georgia Southern football fans have was still visible. Even hours before the game, fans were already participating in a number of passionate chants.

When the game started and Campbell took a hold of the lead, the passion died down, but once the Eagles started storming back the stadium was at a fervent pitch.

One thing that stood out was the use of masks in the stadium. When entering the stadium fans were reminded multiple times by security to put their mask or risk being turned away.

However, once seated, many people ditched their mask for the remainder of the game. The social distancing aspect was still in effect in most cases, but only a fraction of the roughly 6,250 fans in attendance actively wore face coverings.

The George-Anne spoke to multiple students about the environment at the game.

Sophomore Mason McKay said, “I think that having less fans definitely impacted the noise of the crowd and the home-field advantage, but the students in attendance really brought their passion for Georgia Southern football. The fans were a big part of the win on Saturday.”

One thing many fans were questioning prior to gameday is how much Saturday would resemble a normal college football Saturday. With tailgating still allowed, in limited ways, the atmosphere outside of Paulson Stadium seemed to resemble any other fall Saturday in Statesboro.

Junior Noah Lederer said, “The environment was similar to previous years. I thought it would be way worse, but a good crowd came out and it was comparable to a normal game.”