ALL IN: The Fight for Democracy shows new hurdles voters must overcome to vote 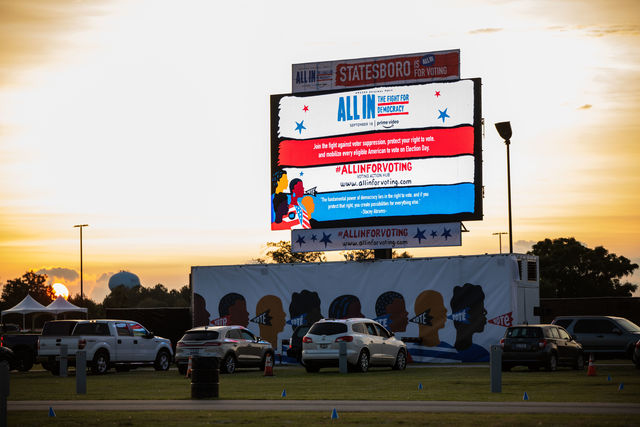 STATESBORO — Stacey Abrams warns of worsening voter suppression in the upcoming election as part of a documentary shown at a pop-up drive-in theater in Bulloch County Tuesday night.

Statesboro was one of three cities in Georgia chosen by Amazon Studios to premiere ALL IN: The Fight for Democracy at the Bulloch County Agricultural Complex.

The film, featuring Stacey Abrams, the 2018 Democratic nominee for Georgia Governor, and her family, told the entire history of voter suppression up to date, starting with poll taxes and literacy tests and ending at current day with exact match and voter ID laws.

Discriminatory voter suppression practices were outlawed in the Voting Rights Act of 1965, but the documentary explains that voter suppression is on the rise following its abolition in 2013, and Abrams believes it had much to do with the 2018 Georgia Governor election.

As said in the film, much of voter suppression is driven with the rhetoric of “voter fraud” despite there being no proof of any large-scale voter fraud found by the Trump administration’s Voter Fraud Commission.

From the paranoia of voter fraud, lawmakers have found new ways of restricting voters; several states including Georgia have begun requiring photo ID, purging or removing people from voter registration lists for being inactive and employing exact-match which will pull anyone’s registration if any information given in the registration form does not match what is on file, including the appearance of signatures.

To combat these new hurdles, Abrams advises voters to check to make sure they haven’t been purged, to find their polling place and to vote early.