The whale buried under Sweetheart Circle 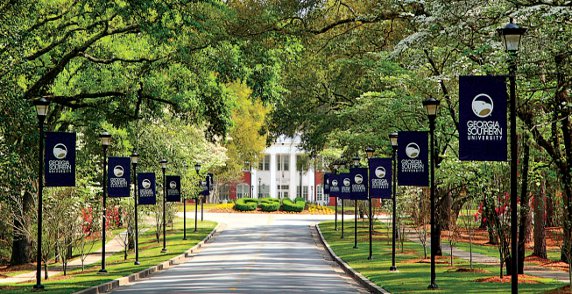 STATESBORO— Sweetheart Circle is a staple of the Georgia Southern campus but what you might not know is that there’s a whale buried beneath it. In fact, it was a Georgia Southern professor who buried the whale roughly three decades ago.

It was Richard Petkewich, Ph.D., professor in the geology and geography department and paleontologist who was alerted about a pygmy sperm whale that had been found beached on the Georgia coast.

Petkewich developed the paleontological collection at Georgia Southern’s Museum and worked to curate other aspects. However, his specialization was in marine mammals. Petkewich also possessed a license that allowed him to collect beach specimens like the whale and bring them back

As part of his research Petkewich has buried other marine animals however, the pygmy sperm whale is the only one to be buried under Sweetheart Circle.

In 2013 Tayler Critchlow who worked for The George-Anne interviewed Brent Tharp, Ph.D., director of the GSU Museum about Petkewich’s research and more on the location of the whale. That article can be found here.

As for the research Tharp said, “He would de-flesh the carcasses to keep the bones for comparative study, which means that the bones would be compared to pre-historic paleontological collections,”

The whale was said to be buried under a sandy hill but in the interview with Tharp, he revealed the burial location of the whale had been lost and that Petkewich’s notes didn’t give a precise location

In Tharp’s words, “it’s out there on the sand hill somewhere across from Sweetheart Circle there at the entrance,”

Margaret Wilson, who is a former pupil of Petkewich spoke more on the subject in a 2015 interview with Johnny Lu who worked for The George-Anne. That article can be found here.

“Richard passed away from health complications shortly after he made those plans and did not leave enough clues for anyone to find the exact location of the whale today,” said Wilson.