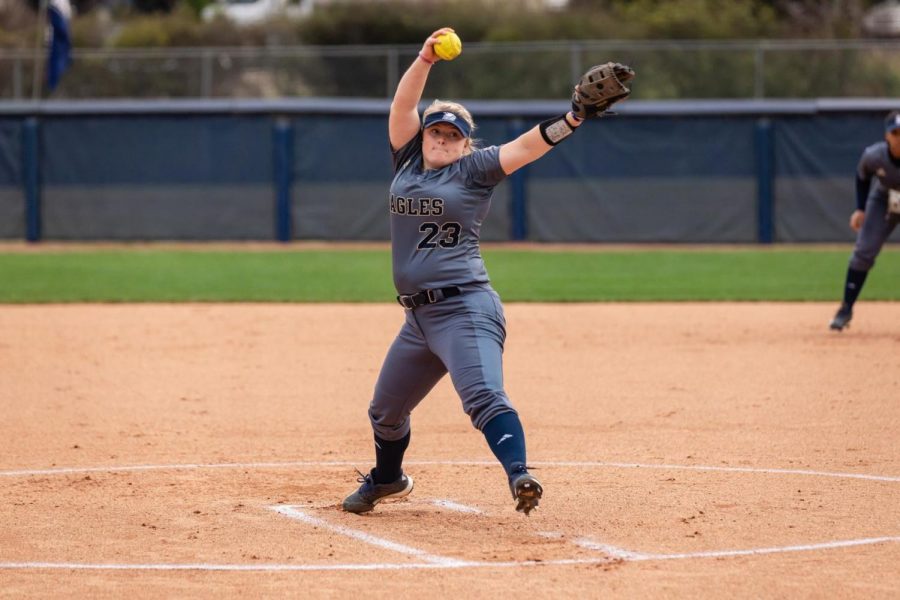 Ashleigh Morton (23) has pitched for 49 innings on the season as well as collecting 17 strikeouts.

Freshman pitcher Ashleigh Morton has been using her first season at Georgia Southern to learn and grow as a student athlete on a team of fiercely supportive teammates.

Morton attended Tattnall Square Academy in Macon, Georgia. During her high school career, she was named the 7-A Pitcher of the Year, GHSA Single A State Runner Up, two First Team All-Region titles, and First and Second team All-State honors. She was a three-sport athlete, also competing in tennis and cheerleading.

In her time here at GS, she has pitched in over a dozen games. She pitched a season long five innings against Siena College at the beginning of March, and threw a career high six strikeouts against Mercer University. She has accumulated 17 strikeouts with eight wins this season.

In arguably one of the hardest games of the season against a nationally ranked University of Georgia team, Morton learned a lesson of perseverance and staying mentally strong. GS was defeated 5-1, but the team stayed optimistic and smart during the game.

“I learned that no matter who the team is we can still compete,” Morton said. “We stayed in the game.”

Making the transition from high school to college is difficult for many students, but it can be especially difficult for student athletes. The softball team practices almost everyday, with one off day. The rigor of the sport can be physically exhausting, but Morton has learned to take things one day at a time.

“In high school, I just pitched at games. We never pitched at practice, “ Morton said. “Coming here, we pitch everyday. That was kind of hard to get used to because you’re really sore at first. But, once you start getting used to it, it’s fine.”

Morton, like fellow freshman pitcher Jess Mazur, looks up to sophomore Rylee Waldrep to show her the ropes. Waldrep seems to be first in rotation for GS, and has accumulated 33 strikeouts this season.

Playing as a new pitcher at this level can be frustrating at times, but Morton wants to remain positive with herself and her teammates because she is still in the learning process.

“[Compared to high school], the game is a lot faster,” Morton said. “If you miss a pitch, the girl is gonna take advantage of that. I’m not a strikeout pitcher. So I’m not gonna go try to strike somebody out, but get them to hit a ground ball.”

Looking forward to the rest of the season, she hopes to make the seniors proud. GS is currently 3-9 in the conference with about a month left of play.