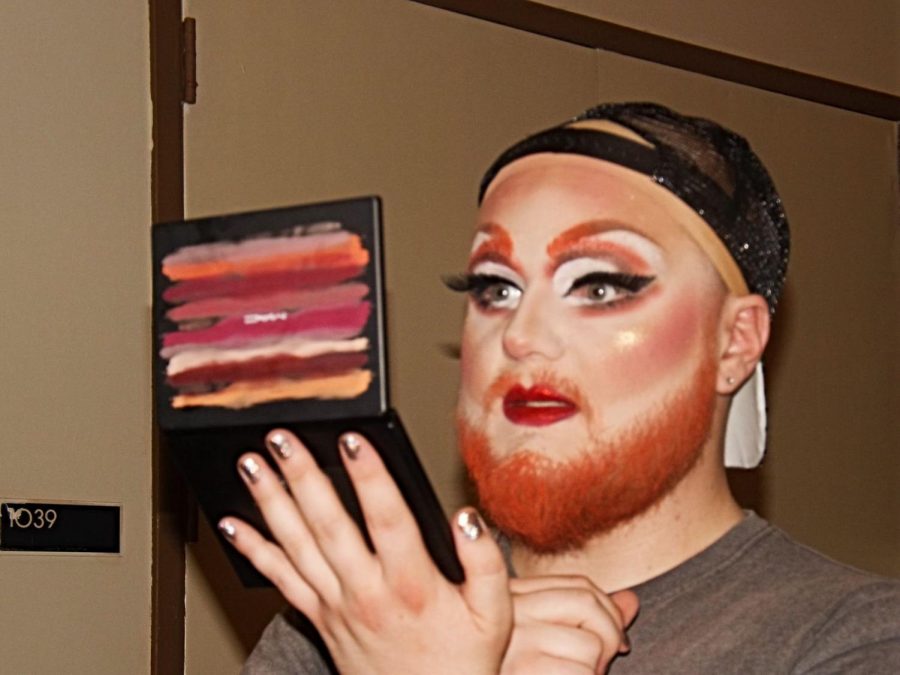 "Damn I look good," Performer D'Queer says as she checks her makeup. Her 'dressing room' during the night of Georgia Southern's Drag Show was a dimply lit hallway, as the backstage restroom were occupied by other queens. D'Queer said she didn't mind though, and used her wits and hand mirror to make sure she looked her best before she was called up.

At first glance, Davis Roberts looks like any other student in the clustered on-campus Starbucks.

His eyes are lightly bloodshot from hours upon hours of thesis writing. His clothes are worn and comfortable, fit for any occasion.

Then there’s his beard. There’s nothing particularly unique about it aside from its well-maintained shaped.

However, Roberts’ beard is a major part of his identity, not just as a boy, but as his part of his performance art.

By day, Roberts is a mild- mannered, well-to-do student, but by night he trades in his school books for his best heels and paints his blond beard a feisty red.

For the evening, Davis Roberts takes a back seat so that Jen D’ Queer, the bearded drag queen of the south, can take center stage, and enchant all who see her right beside her sisters of the night.

From the plays of William Shakespeare to the early inclusive beauty pageants orchestrated by drag queen pioneer Mother Flawless Sabrina, drag has been an evolution from a common theater practice to an award- winning form of entertainment that has gained legitimacy both on a national and international stage.

In the past decade drag has become more recognizable due to the sensational success of RuPaul’s Drag Race.

While RuPaul has a special place in the heart of the Drag community, and has helped society understand the culture, there are some instances where it has putting Drag in a one kind of light that causes people who see local scenes to be looked down upon them.

Local drag races, such as the one held in Statesboro, allows for ‘different types of queens’ who are lower income and less-accessible resources to be seen by the public.

However, Roberts’ said RuPaul’s is important in making drag accessible to the public.

“It’s essentially the gay superbowl,” Roberts said. “I watch it every year. I’m always at viewing parties. I’m willing to critique it for its few problems.”

Drag culture is not an uncommon phenomenon on Georgia Southern University’s campus.

For the past 11 years the Gay- Straight Alliance has helped host a shadow cast version of the “Rocky Horror Picture Show,” the sci-fi comedy about a ‘sweet transvestite from transsexual transylvania.’

On top of that, the campus has its own drag race each year, held in the Russel Union’s Ballroom where students line the walls long after all the seats are filled just for a glimpse at the lip-syncing queens.

Roberts, a Statesboro-born performer, attended one such show during his earlier years of college where his interest in drag was peaked.

It wasn’t until Roberts saw his first bearded queen during a pride parade that he decided to transition from an audience member to a performer, and has taken the stage as Jen D’Queer for over a year and a half now.

For inspiration he studied queens who used exaggerated comedy to make their audience laugh and feel comfortable.

Roberts exists “as a boy” and as Jen D’Queer, but they are separated only by a thin layer of makeup and a few personality tweaks.

As a queen, one of the most important aspects of D’Queer’s look is her makeup and hair.

Her wigs can be found rather cheaply off Amazon, and the places he finds his signature makeup varies depending on what he’s looking for.

At home, Roberts’ small closet is stuffed to capacity with his denim shirts and shorts and D’Queer’s fur coats, gowns and shoes. Roberts said he is a ‘thrift store shopper’ when it comes to buying performance clothes, and usually has to make adjustments to garments when he can.

“Taking them in isn’t as big of a deal than how you use them,” Roberts said. “How you utilize the things you find is more interesting to me.”

Roberts wears between a women’s 12 to a women’s 13, and sees them more as a utility due to the need to make them last longer. Years of practice made him a confident, blister- free stroller.

Of all his clothes, he spends more money on strong sets of shoes than anything else.

“I don’t buy cheap shoes because they break when you’re not 130 pounds,” Roberts’ said.

To shape his body, Roberts uses one-piece bathing suits and corsets, which for a man of over 230 pounds can be uncomfortable.

“Drag can be cumbersome, there’s a lot involved,” Roberts said.

The Russell Union hardly has the space to accompany a group of queens. The two small restrooms in the back are already filled to capacity, so Roberts makes use of the dimly lit but spacious hallway.

At his feet is the camouflage gown he’ll be wearing for the evening, accompanied with a bright orange wig that will set off the red in his painted beard swimmingly.

From behind the curtains he listens in pride as his sisters of the night perform and accept monetary tips from hoards of cheering colleges students.

As the queens filter in and out, cheers and congrats are given among each other, the stage free of competition and any sort of mean-spiritness. The majority of them are amateurs who are more focused on the good time than the money or fame.

“A lot of [being a queen] is building a reputation as a good performer, but also as a good person,” Roberts said. “If you’re a nice person in the backroom, you’re going to be much better received.”