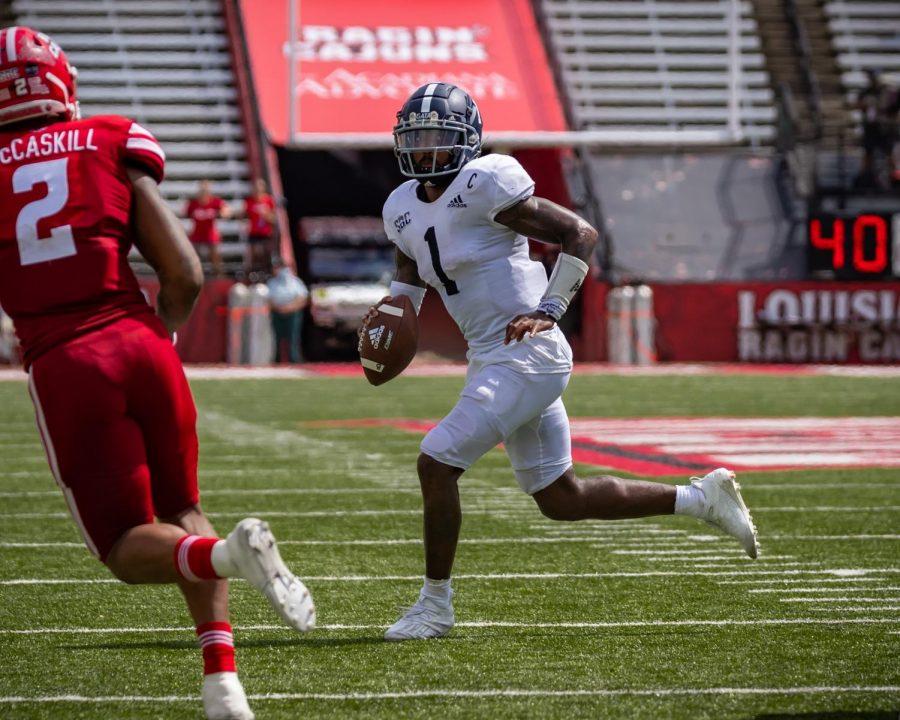 LAFAYETTE, LA — In a game where the Georgia Southern was a double-digit underdog, many people never even bothered tuning into the game. Yet, Eagle Head Coach Chad Lunsford once again got his team ready for the occasion of playing a ranked opponent.

The Eagles came out of the locker room on a mission, immediately driving the ball down the field twice before scoring a touchdown for the first points of the game on the first play of the second quarter. However, this lead would be short lived as Billy Napier’s Louisiana team would find the endzone just five minutes later on the next possession of the game.

After one half of football, the game was tied at seven, with neither team being able to find the scoreboard again in the first half of play.

In addition, both offenses would come out sluggish in the second half. The slow start would result in a mostly uneventful third quarter, with both teams kicking a field goal to enter the final period in a 10-10 deadlock.

The fourth and final quarter was anything but uneventful and would unleash a rollercoaster of emotion for fans of both teams.

Less than five minutes into the quarter, Louisiana quarterback Levi Lewis threw a wobbler of a touchdown pass to give his team their first lead of the game.

The following ten minutes were some of the most stressful minutes in recent memory for Eagle fans everywhere. The offense would have to punt the ball on their first possession of the first quarter, but after that Shai Werts would take over. The veteran quarterback would complete his next four passes for 51 yards and rush for another 10 yards as he led the Eagles to a touchdown to bring the score within one point.

Then, in a decision that did not shock anyone watching, Lunsford decided to send the offense back onto the field to attempt a two-point conversion. On a play that felt like it took an eternity, Werts miraculously found Darion Anderson to give the Eagles the lead with 54 seconds to play.

Unfortunately, this would prove to be too much time for the Ragin’ Cajuns to come back. Georgia Southern would decide to run what most call a ‘prevent’ defense, which allowed vetera quarterback Levi Lewis to hit his receivers underneath time after time to put his kicker in range.

In the end, Louisiana kicker Nate Snyder would get the chance to attempt a 53-yarder with two seconds to go. Snyder, who had only made two of six field goals on the season, would leave no doubt as he kicked the game-winner through the uprights.

As tough a loss as this was for Chad Lunsford’s team, the fight and heart of this Eagle team would shine through. The Eagles proved today that they are a real threat in the Sun Belt and sent the message to Louisiana that this might not be the last they see of the Eagles in 2020.