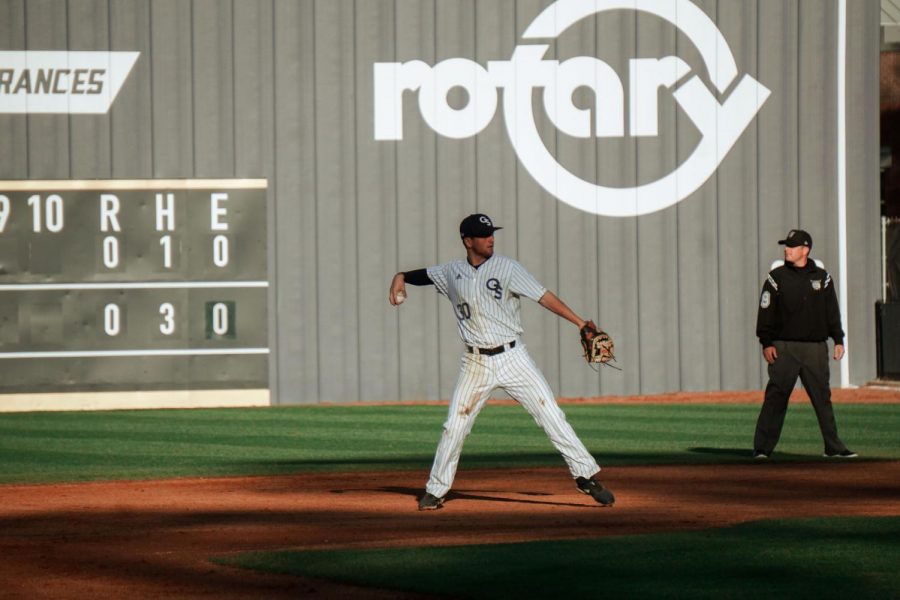 Junior infielder Steven Curry (30) managed to show for three runs and five hits on the weekend as well as logging 2 RBI in the series finale against Appalachian State.

The Georgia Southern baseball team had a successful weekend trip to Boone, North Carolina and ended up beating out the Appalachian State Mountaineers to bring the win back to Statesboro.

In the first game of the series, the Eagles ended up scoring in the top of the sixth inning to get the score up to 3-0, just enough for that lead.

The fog in Boone delayed the game for a while and ended up being the reason that the game was called and the Eagles were able to walk away with a win after finishing up play on Saturday morning.

The second game went a little smoother in terms of weather, however that did not help the Eagles much in scoring.

GS’ first hit of the game didn’t come until the top of the fourth by junior INF Steven Curry. While ASU was already up by five, redshirt-senior OF Tyler Martin was able to wack a single towards an open spot in left field and the Eagles got a run.

ASU saw action in the bottom of the sixth and were able to gain their 9-1 lead, which the Eagles responded to in the top of the eighth, bumping the score to 9-5 in the Mountaineers favor.

Sophomore OF Nolan Tressler was able to bring two of those runs in for the Eagles after smacking a two RBI double.

Shortly after that, Martin knocked a bomb to left field and two more Eagles were able to make it back to home plate.

Although a few Eagles performed well during Saturday’s match-up, the team ended up finishing under ASU with a score of 9-5 to count the game as a loss.

In Sunday’s final competition for the two teams, it took a second for GS to get a lead, but starting in the top of the fifth fans started to see that fire.

Sophomore INF Austin Thompson had a leadoff walk and freshman C/OF JP Tighe hit an RBI double to add to the scoreboard for the Eagles. Curry drove in two more runs for the Eagles and the score sat at 3-2 to finish out the top of the fifth.

A few innings later, in the top of the seventh, sophomore INF Jason Swan hit a leadoff double for the fourth run for the Eagles.

The end of the game was solidified by one run scored by an RBI single from freshman INF Noah Ledford, getting Martin home. Then freshman INF Blake Evans hit a two out bunt to the pitcher in order to get senior RHP Lawson Humphries home.

The Eagles counted the series as a win after Sunday’s 6-2 victory over the Mountaineers.

The next matchup for the Eagles is set for 6 p.m. on Wednesday against Kennesaw State University. The game will air live on ESPN+ from J.I. Clements Stadium.