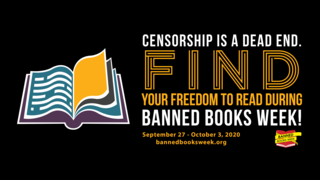 STATESBORO — With it ending on October 3, Banned Books Week and its events are beginning to wrap up, but that doesn’t mean the message they stand for should be forgotten.

Beginning in 1982 by First Amendment and library activist Judith Krug, Banned Books Week is held every year during the last week of September, and aims to promote the freedom to read and that expression of unorthodox views should not be restrained but instead offered freely so that readers may make their own conclusions.

As its name suggests, the weeklong event also encourages readers to examine books that have been banned from or challenged in libraries or schools and form their own opinions on them as well.

“People are often very much surprised; they think that challenging and banning books is a thing of the past. They don’t realize how frequently it’s still happening today.” Said Dawn Cannon-Rech, Chair of the Libraries Exhibit Committee.” They’re often surprised when they find out why a particular book has been challenged and tried to be banned from libraries or other areas.”

Though the threat of COVID-19 limited what could be done with this year’s events, Georgia Southern’s Libraries still did their part to spread information about Banned Books Week. In addition to providing a specially made Library Guide on Banned Books Week–including information on the event’s history, a schedule and rundown of what events will be held during the week, and a list of all the current banned and challenged books–said Library Guide also had links to all of the events that were being held virtually throughout the week by the American Library Association’s Office for Intellectual Freedom.

“Banned Books Week is used to bring awareness to the harm that censorship can do and to remind folks that we should all have the ability to choose what we want to read when we want to read it even if it is, quote unquote ‘controversial’ or something someone else may not agree with.” Cannon-Rech said. “There shouldn’t be a reason that somebody else can tell you that you’re not allowed to read that.”