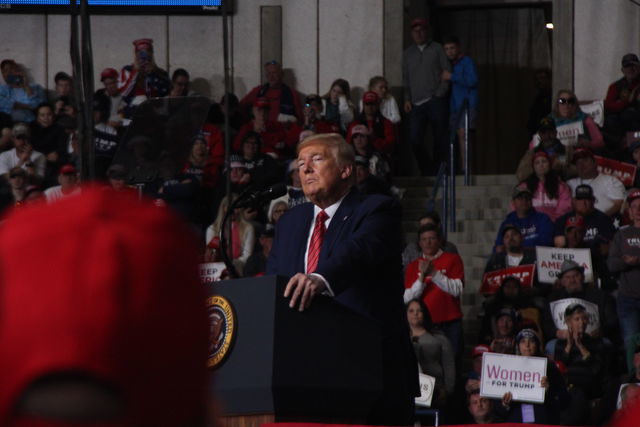 STATESBORO — On October 2, President Donald Trump announced that both he and the First Lady Melania Trump had tested positive for COVID-19. What impacts this could have on the nation and the upcoming election are still unknown, but several students and faculty of Georgia Southern University have made their thoughts on the situation known.

Many kept up to date on the situation, and were informed of his contraction of the virus soon after it was revealed. Several expressed concern for the president’s health.

“I hope he gets better, because it’s definitely something people should take seriously.” One student said. “I wish him well.”

“I don’t think this will affect [the nation] too much.” Another reported. “I think he’s still able to do his job just the same, but he just won’t be able to campaign and get out and do as much.”

Others point out the rather ironic turn of events, given Trump’s history of downplaying the threat of COVID-19.

“I just lost someone this weekend to COVID, so it’s like, you play these games with this deadly disease, and say it’s not true, and now you’ve got it!” Stated a student. “I find it really ironic, and maybe this is kind of a way of him learning a lesson.

Another said, “He kept on saying all these racist things, and not protecting Americans before until it got really, really bad and Americans started dying. So now he wants to believe that it’s actually a thing and it’s actually harming people.”

Some are more concerned with what this could mean for the upcoming election, as someone with such an unpredictable disease running for president could lead to just as unpredictable and precarious situations.

“If he recovers, it’s just going to add more drama to the election.” Reported a faculty member. “If something worse happens, being so close to an election, who knows what’ll happen?”

“I hope he doesn’t try to use it in his defense or anything like that.” A student claimed. “I also just wish them well–I mean, it’s COVID–I know a lot of people on Twitter are having a great time with it, but I think for the most part I’m concerned for their health; I want them to get better, but I also hope he doesn’t use this in a negative light.”