The Man Behind the Bird 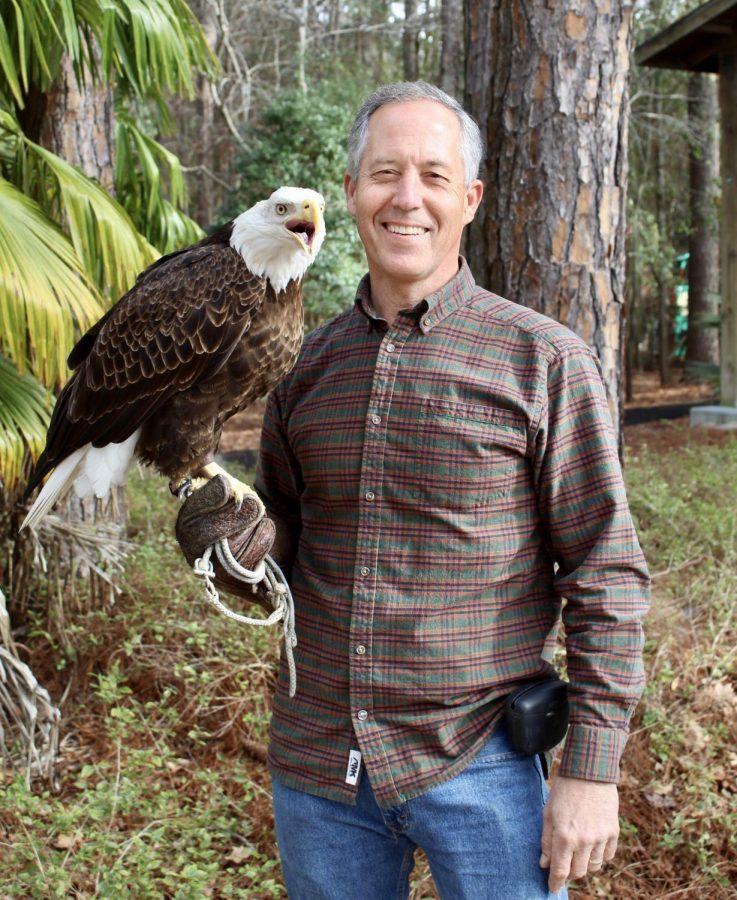 As I sit on a cold metal bench outside of the Wildlife Center at Georgia Southern University, I can hear the sounds of nature all around me. Birds are chirping, squirrels are playing in the crunchy autumn leaves and water is babbling from a nearby fountain.

The first thing someone sees as they enter the center are colorful and exquisite displays of wildlife. I spot some people milling around exploring the center on their own time, admiring the displays. There are snakes, fish and all types of animals on display. The feeling in the air is calm and eager to learn, which is something Steve Hein loves to do.

Steve Hein’s office, located in the Wildlife Center, is decorated with what at first glance seem to be amazing photographs of wildlife and animals. Upon closer inspection, I discovered that they are actually paintings that Hein has done himself. Three sit across the top of his desk of the bald eagle: Georgia Southern University’s iconic symbol Freedom.

Hein graduated from Georgia Southern University with a degree in Business Administration in 1983. After graduating from GS at age 23, he dove headfirst and became a full time professional wildlife artist. Hein said he has “never had a real job” because it doesn’t feel like work to Hein since he gets to do what he has such a strong passion for every day.

Although Hein has never had an art lesson, his talent can be seen in his busy work history. Hein has done artwork for numerous companies like Coca-Cola and Georgia Power Company. Along with personal projects, Hein is also working on up to a year’s worth of commissioned art pieces at any given time.

As a wildlife artist, Steve received the Georgia Governor’s “Artist of Excellence” award; won the 1987 and 1988 Georgia Wildlife Management Area Stamps; was chosen in 1986, 1987 and 1990 Georgia Ducks Unlimited Artist of the Year; and worked on a national level with Ducks Unlimited, Quail Unlimited and the National Wild Turkey Federation.

Along with art, Steve also finds passion in falconry. Hein has been participating in the ancient art of falconry for 33 seasons, with this past season his most recent. Steve often credits his career here at Georgia Southern as a complete “accidental career” more than anything else. He said he was “in the right place at the right time” and that his talent and passion for falconry was the genesis for creating the Wildlife Center here at Georgia Southern.

When it comes to other things Hein enjoys doing, the list is endless. Steve likes to fish, practice archery, woodworking, and the obvious: bird watching. He is also an avid hunter with his own falcons, hawks and dogs that he has trained to hunt alongside him.

There is no way to put Hein’s typical work day into a strict schedule because every day is not the same. Although Hein does not participate in the many different types of educational presentations done at the Wildlife Center, he credits the staff for the smooth running operation of the center.

“We exist on the backbone of the students who have gravitated to the wildlife center,” said Hein.

While most students who work at the Wildlife Center are studying a subject related to biology or wildlife, Hein says he doesn’t just seek out biologists. He enjoys working with “people persons” because so much of what they do involves being the liaison between nature and man for people who come to visit the center.

The way the Wildlife Center is run is fundamentally and philosophically different than a lot of other centers of the same caliber.  This center focuses on hands-on learning and having the educational process be an intellectual and emotional pursuit instead of one or the other. Hein helped create the Wildlife Center and was even working on the blueprints in his own kitchen.
“‘We [as humans] are tactile creatures, we don’t say ‘hey don’t touch that,’” said Hein. “We do the exact opposite. We say ‘hey come and touch’ in a responsible way.”
Game days in Statesboro are electric and something that everyone who has been to a game in Paulson Stadium looks forward to is Freedom’s Flight during the Southern Pride Marching Band’s pregame performance. Those 30-odd seconds where Freedom is flying over the heads of Eagle Nation are an iconic part of Georgia Southern culture. However, someone that is an important gear that keeps the machine turning is often in the foreground.

The preparation for game day flights actually begin the week before the flight is scheduled to take place, Hein said. He typically tries to get Freedom into the stadium at least two times during the week, doing practice flights around the same time he would be flying on Saturday. The staff also tries to mimic how Freedom’s eating cycle would be like if he were to be in the wild, so Freedom is looking for food on game days and is essentially hunting for Hein, who is his food source. 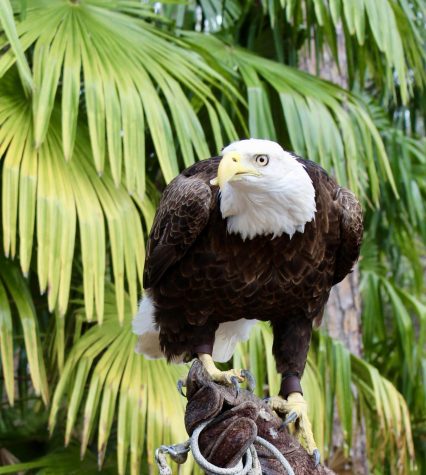 Steve is always the person that Freedom flies to, so Hein has never been on the upper deck of Paulson Stadium for a release. Wildlife Curator Scott Courdin or Education Program Coordinator Wayne Paulk are one of two people who release Freedom. Hein is the person down on the field doing what he calls his “Freedom Dance”.

Regarding what goes through Hein’s mind during Freedom’s Flight, he had two words to say: “Not again.” Hein knows very well that you can’t ever predict what an apex predator is going to do, and he calls Freedom’s flight pattern when he circles the stadium a “toilet bowl flight”.

“There are certain things that I reflect upon in that moment that puts it all in perspective for me,” said Hein. “Flying a bird is entertainment. There are things much more important. You have the national anthem, you’ve got a canon that’s signifying our military service men and women.”

During the flight itself, Hein has to stay hyper-focused on Freedom. He is constantly watching his movements and trying to read his behavior. Only until Freedom lands safely can Hein somewhat relax and enjoy the crowds reaction.

Freedom has given so many amazing moments to Hein. It was difficult for Hein to choose which moments stood out the most.

One of the moments that came to his mind was during the first time Georgia Southern played against the Naval Academy. As 4,000 midshipmen men and women marched onto the field, Steve Hein was right there with them. As they marched past, the midshipmen cut their eyes to Freedom in recognition. Later on in the game, Hein ventured into the stands that was a sea of white with Freedom.

Another moment he recalls happened after a game in Paulson Stadium. Steve and Freedom had just finished singing with the band and football players, and he was walking around and allowing people to snap some photos with Freedom when a Latina woman approached him. Hein recalls that she was tearful and trying to speak, but Hein unfortunately couldn’t understand her. She then placed a gentle kiss on Freedom’s shoulder. There was another woman nearby who was able to translate to Hein. He learned that the woman had just applied for America Citizenship and being able to be there and see the nation’s symbol meant a lot to her.

“I had to turn around myself as to not get emotional in front of them,” said Hein.  “It was just so touching,” said Hein.

As our interview came to a close, one thing became very clear to me: Steve Hein is someone who loves what he does, and he has so much passion for art, wildlife and animals that it is sometimes difficult to put into words.

Watching Hein and Freedom interact in what some would call their “stomping ground” without the roaring crowd and bright lights game days offer in Paulson Stadium, was something truly special. Hein was stern, yet comfortable with Freedom, and it was clear to me that both of them have a mutual relationship of respect.

Everything boils down to his love and respect for the outdoors and everything in it. Hein has been able to bring two things he has an undeniable passion for, art and wildlife, into a career that seems perfectly tailored to him.
“It’s been a really fun, unbelievably rich life that is more of an accident than anything else. I’ve been very blessed and I’ve been the beneficiary of the ‘serendipity and synchronicity of life,’” said Hein.