The story of Jared Benko, GS' athletics director, who only had four days of "normalcy" before the nation came to a halt 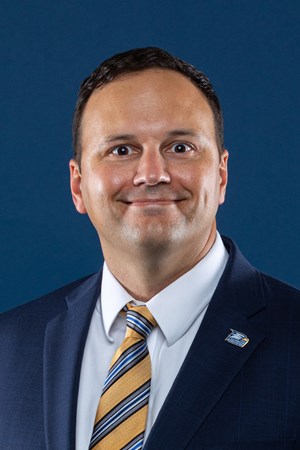 In a world that has been anything but normal for the past few months, almost no one has a “normal” job experience. However, Georgia Southern Athletics Director Jared Benko has had arguably one of the most unique jobs on the planet since the global pandemic first broke out.

On March 5, news broke that Georgia Southern had hired then-Mississippi State Deputy Director of Athletics Jared Benko to be the Eagles’ new director of athletics. On March 9, Jared Benko’s hiring was officially announced by the university. The hiring was hailed as a “perfect fit” by most and the future of Eagle athletics seemed to be in great hands.

However, approximately a week later, Georgia Southern students were sent home and the sports world virtually shut down. This put Benko in a never-before-seen situation of being an athletic director during a global pandemic.

In addition to a global pandemic, the task of hiring a new basketball head coach was thrust onto Benko before he was even supposed to officially start his new job at Georgia Southern.

“In some ways there hasn’t been that natural progression, but I wouldn’t trade it. To me, we’re always going to try to find the positives in everything we do,” said Benko. “Despite COVID-19 and other challenges, it has afforded me the opportunity to know my staff  and our student athletes on a deeper level.”

The abnormalities Benko faced did not stop when sports returned this fall. In fact, there are a plethora of new obstacles that Benko has encountered as director of athletics.

The biggest new obstacle has been the ever changing situation revolving around positive COVID-19 cases and contact tracing. Georgia Southern has had a number of sporting events cancelled on them for this reason, from football games to women’s volleyball matches.

When asked if there was a point where Georgia Southern had drawn a line in the sand in regards to canceling a game, Benko said, “It is going to be under the auspices that we absolutely can’t play the game.”

As a first time athletic director, Benko has been praised for his work but has also leaned on other well-respected athletic directors such as Florida’s Scott Stricklin and the University of Connecticut’s David Benedict. During an era defined by the COVID-19 pandemic, this advice from his peers has been extremely valuable for Benko, according to him.

When asked about the eventual return to normalcy the world hopes to see once the pandemic is under control, Benko expressed a lot of excitement. He added that Eagle fans are just as passionate if not more than fans at his previous stops in the SEC and cannot wait to see Eagle sporting events at full capacity once again.