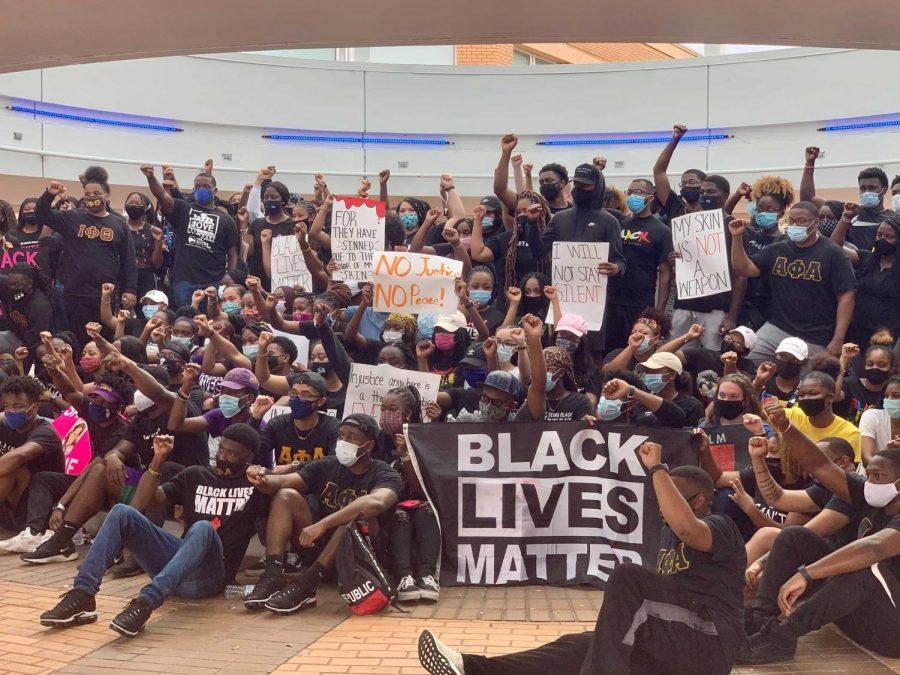 “At this climate, you know, I definitely wanted to, you know, offer some type of some type of opportunity for people to come together and fight for some of the things I believe in, we see what is going on in this world,” said Jalon Ross, a senior civil engineering student who led and helped organize the march.

Ross is the president of Men of Vision and Excellence. He also serves on the President’s Student Advisory Council, Alpha Phi Alpha Fraternity Incorporated Xi Tau Chapter and is the student assistant for the office of Inclusive Excellence.

“My overall goal for the march is to spread the message to the campus that there are people here that, you know, support the minority groups,” Ross said. “It’s people here that believe that Black Lives Matter. It’s people at the school that believe Breonna Taylor did not deserve the injustice that she received and it’s not just Breonna Taylor is multiple names that we can keep going on for a list.”

Taylor was a 26-year-old Black woman who was shot multiple times and killed by Louisville police officers in her apartment in March. According to The New York Times, the raid was botched and no charges were announced against the other two officers who fired shots. Additionally, no one was charged for Taylor’s death.

Ross led the march through campus and off-campus near Cambridge apartments. He said he wanted to bring awareness to GS and to Statesboro and show that students are trying to fight for the justice that he thinks should be served.

Kyra Belk, president of the National Council of Negro Women organization, encouraged many of her members to come out to the march in support of Taylor.

“With everything that’s going on, I feel like as Black women as our whole organization, we should just come out and fellowship with other Black women and Black individuals on campus just to show that our voice means something, so people know that we actually stand for something,” Belk said.

Ross says a lot of times people try to find excuses when social injustice and police brutality happens, but he believes no person should lose their life to police brutality with special emphasis on the background of Black people being killed by police.

“You see it every day when you open up your phone, you know, police brutality, social injustice, racial injustice, inequality are very evident today,” Ross said.

Ken Gassiot, associate vice president for student engagement, said he is glad that students have the comfortability to express themselves and show concerns for what they care about and the freedom to so on our campus.

“What we want to do in the division of student affairs is support students in what they care about, support students with their concerns, and let them know that they have university, staff and faculty who cares about them as human beings,” Gassiot said.

Ross said to be able to achieve some kind of resolution when it comes to police brutality and police excessive use of force in America, is to vote. He said voting for the local sheriff, congress, senators and house representatives is where it begins.

“How we can change it is by voting people into the elected positions that we want to see,” Ross said. “From there we will be able to work on those systematic issues, if we able to vote out the ones that’ve been doing that.”