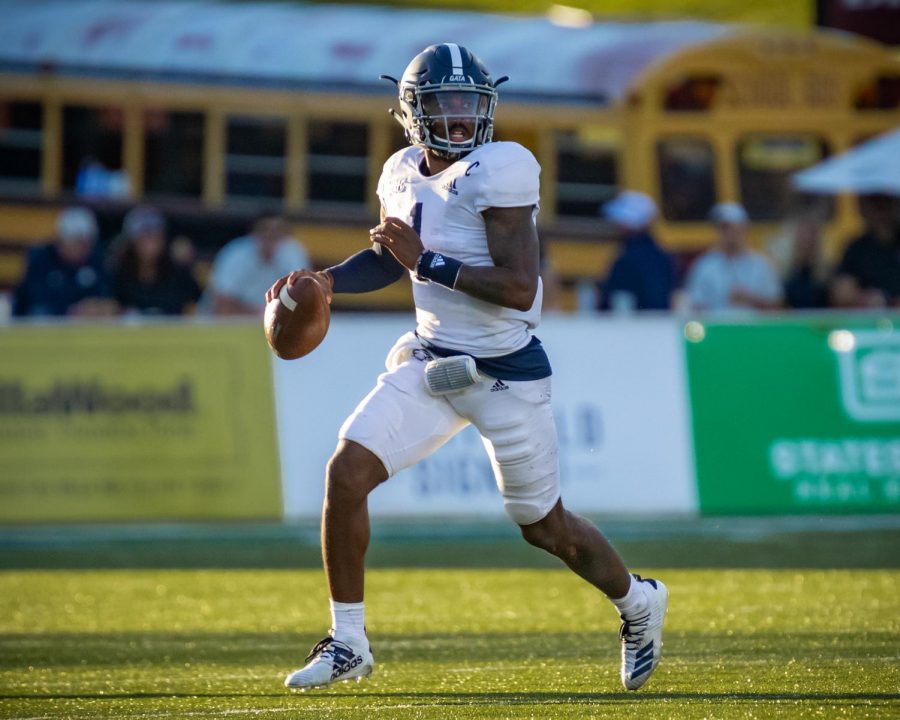 STATESBORO — Just five games into the Eagles’ 2020 season, they will travel to take on a second ranked opponent. This time it will be a battle at the beach as Georgia Southern will take on the Coastal Carolina Chanticleers.

Georgia Southern enters the game with a record of 3-1, most recently securing a 41-0 shutout victory over UMass. On the other hand, Coastal Carolina enters this week undefeated at 4-0 and on the heels of a thrilling victory over previously ranked Louisiana. This weekend’s game could prove to be one of the Sun Belt’s most important games of the season.

On offense, the Chanticleers boast an extremely balanced yet effective attack. Through four games, Coastal Carolina has averaged over 430 yards per game and over 40 points per game. Quarterback Grayson McCall has quickly established himself as one of the most underrated players in the country with 14 total touchdowns and just one interception.

On the defensive side the Chanticleer have a number of weaknesses the Eagles will look to attack. Through just four games, Coastal Carolina has given up an average of more than 23 points per game and have struggled defending the pass, which Georgia Southern could look to exploit now that Shai Werts has proven he is more than capable of passing the ball at a high level. The Chanticleers have also struggled stopping the ground game as they allow more than 160 rushing yards per game in 2020.

The Eagle offense finally showed what they were capable of against UMass, as they dominated the Minutemen in every aspect of the game. For a team that tends to run the ball more times than not, Shai Werts surprised many people when he threw three touchdown passes. A youthful Eagle receiver corp showed worlds of potential against UMass as Beau Johnson, Khaleb Hood, and Emil Smith all got in on the action,

On the defensive side of the ball, the Eagles finally performed at the high level many have expected all season. Derrick Canteen and Darrell Baker Jr. both forced a turnover as the defense put on an absolute clinic. UMass struggled to find their footing all afternoon and the Eagles were disruptive enough to hold their opponent to under 200 total yards.

After a 41-0 shutout of the Minutemen, Georgia Southern will enter this game on an extreme high. However, Coastal Carolina is coming off an extremely emotional victory over a ranked opponent, so there will be lots of momentum on both sides. This game should be extremely entertaining as both teams have shown explosiveness in every aspect of the game.