In the mind of “Go Play” designer Isaiah Hendrix 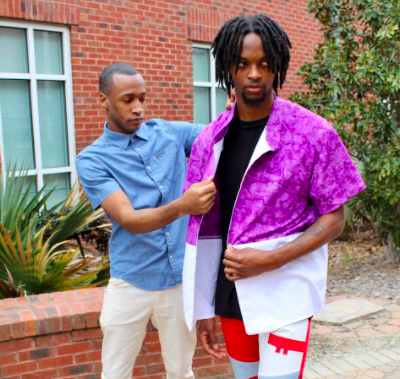 When you look inside the mind of Student Designer Isaiah Hendrix, what would you see? Bright and vibrant red, but also soft colors like baby blue and cream to compliment. You would see shapes of every kind, finding there a way to connect with one another. The mind of Isaiah Hendrix is a puzzle of contrasting colors and shapes, but in reality, he puts this puzzle together by making eye-catching, one of a kind designs.

Hendrix’s passion for fashion has been long-standing, but his passion for designing was sparked when he took his first apparel course. At the time, he was a public relations major with a fashion merchandising and apparel design minor. On the first day of this class, Hendrix made a pair of jeans.

“I fell in love with them and I was like alright this is what I want to do,” said Hendrix.

Before the class even ended, he started the process of changing his major to fashion design.

Before taking a step into the world of design, Hendrix never thought that would be his path, but after he began working with clothes, and seeing all of the different aspects that go into making the clothes, he began to really appreciate it. The more he delved into the process of designing and discovering his process, his respect for design grew.

Hendrix’s designs are non-conventional and eye-catching. They are inspired by video games, specifically a game called “Overwatch.” Like “Overwatch,” Hendrix’s design aesthetic has a futuristic aspect to it and includes bright vibrant colors.

“I like to have different color waves to make it look they’re part of a team,” Hendrix said.

Geometrics and minimalism also play a role in aesthetics. Hendrix said he thinks of it as an abstract painting, and from there he simplifies it down to one type of shape and then adds a fitting color.

“So everything will look like you’re looking at this 8-bit digital realm but very close up,” Hendrix said.

“Go Play is fun and futuristic and always feels like you’re moving and that is how I see my clothing and fashion as,” Hendrix said.

There is a meticulous but necessary process that goes into creating Hendrix’s line. It begins with a design development, which includes researching his idea and finding a reason why he wants to create it. Next is fashion forecasting, which involves looking at what’s in trend, and, lastly, making sure the idea is up to date.

“You find things that are current but make it different from [what] everyone else is doing,” Hendrix said.

Selecting the details of his next moves comes next such as figuring whats his target audience as well as what color and fabric he’ll use. Once the details are chosen pattern is an add-in, and this process is like putting a puzzle together. Hendrix’s favorite part throughout this whole process is sewing the pieces together. After this, he has a garment.

Indecisiveness is to blame when it comes to the challenges Hendrix faces.

“I can have everything patterned out and stylized, and I will start sewing it together and realize I don’t like it, so I’ll scrap it and start from new,” he said.

Some would say procrastination can work to someone’s disadvantage, but working under pressure is what fuels some of Hendrix’s best work.

“I like to keep my best ideas right there on edge,” said Hendrix.

Through his challenges, Hendrix creates work that he is proud of, and the end product for him is his favorite part in the whole design process.
“Art is not art until someone sees it,” Hendrix said.
Seeing his designs come to life from nothing but an idea to be worn by people is more rewarding than he can express.

Virgil Abloah, the founder of Off-White and artistic director for Louis Vuitton, is a designer Hendrix looks up to. Abloah’s style design is streetwear with eloquence and radiates his personality which is something Hendrix wants to follow.

Everything in fashion needs to have meaning, Hendrix explained.

“I like to put things when they don’t belong, so I put belt loops mid-thigh rather than on the waistband or I put hoodies on pants,” said Hendrix. “They’re not supposed to go there, but I find it cool.”

Hendrix gears his designs toward the younger audience and uses his whimsical and street ideas to make garments, unlike other designers.

“When I make something, I want people to be noticed and be comfortable but also stand out,” Hendrix said.

Reflecting on his journey through fashion design, Hendrix recognized his growth and evolution in design and plans to continue to grow with each garment and fashion line.

“Clothing, same with music or the same with huge events, kind of shape where the world is going, and I just feel like fashion is my lane to make history with and establish my DNA with,” he said.