Following a tough loss, the Eagles will have just five days to prepare for South Alabama 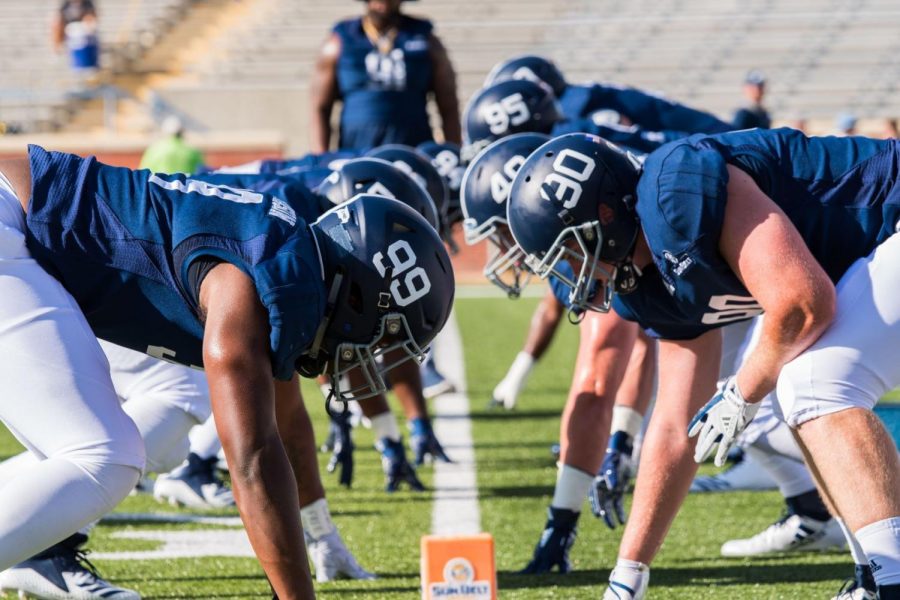 Only five days after the Eagles suffered an ugly loss at the hands of Coastal Carolina, they will host a South Alabama team who has played with much more energy in their past two games.

Both teams enter the game with a record of 3-2 (1-2 SBC). However, Georgia Southern enters the game less than a week after a loss to Coastal Carolina. On the other hand, the Jaguars will travel to Statesboro less than a week after a dominant victory over Louisiana-Monroe. While not holding many implications in the race for the Sun Belt Championship, the Thursday night game could prove to be one of the most interesting conference games of the season.

On offense, the Jaguars do most of their work through the air led by the combination of freshman Chance Lovertich and sophomore Desmond Trotter at the quarterback position. However, the Jaguars have also proven they can do enough on the ground to force opposing defenses to respect the run as well.

On defense, both teams have proven to be stout against the run while struggling stopping opponents through the air. Despite their struggles against the passing game, the safety tandem of Keith Gallmon and Tre Young has proven to be a force for the Jaguars with over 50 tackles and seven passes defended between the pair.

First and foremost, the Eagles must be able to air the ball out against a defense that has not performed well against the pass all season. A successful passing game should allow for Georgia Southern to open it up on the ground and play to their strength. Unfortunately, quarterback Shai Werts is questionable due to an injury and backup Justin Tomlin has been extremely average when asked to throw the ball, completing under half of his 28 career pass attempts.

On defense, the Eagles once again showed many flaws last week against the Chanticleers. The Eagle defense forced two turnovers on Saturday, but struggled mightily otherwise. In order to slow down the two-headed Jaguar passing offense, the Eagles must get pressure on the quarterback in order to rush their reads. Georgia Southern left the middle of the field wide open almost every drive against Coastal Carolina which allowed multiple big plays to slice directly through the heart of the defense. It is imperative that the Eagle secondary steps up and performs up to expectations if the Eagles want to win this game.

Despite being a seven point favorite ahead of Thursday’s home game, the Eagles have simply not proven they can play at an elite level so far this season. The play calling for the Eagle offense must also improve in order to create any type of energy for the offensive players to build on. Thursday night will see a hard fought game between two teams who must win the game to hold onto any hope of competing for a Sun Belt Championship in December.

DJ’s Prediction: Georgia Southern gets back on track with a 24-20 victory over the Jaguars