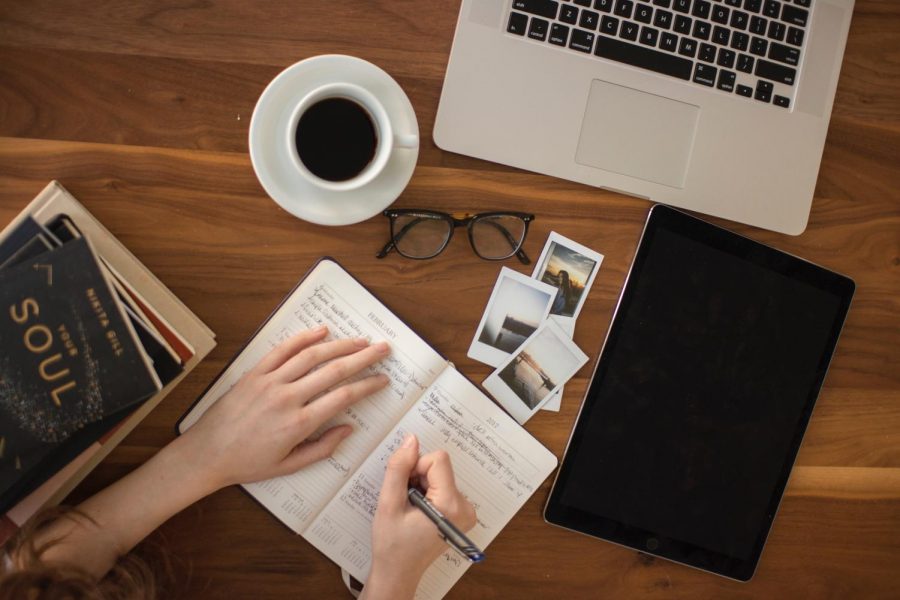 As a full-time employee funding her own education, Smith decided to take things slow and stretch out her undergraduate years with the intention of finishing school in six and a half to seven years. Instead of the standard twelve to eighteen hours, she takes from three to nine hours a semester at the most.

As a research assistant, she looks through and works with academic literature that is periodically published such as journals, periodicals, monographs—anything set that keeps being published on a schedule both electronically and physically.

She manages the university’s collection that she continually acquires new literature for and then, on top of that, she does preservation work.

“I’m the book doctor, kind of. I fix up old works and send things to the bindery to make sure everything’s okay. It’s really fulfilling,” said Smith

In fact, her primary goal in life is to work with accessibility of information and how people perceive it, and she hopes to one day earn a master’s degree in library and information science. Smith is especially interested in information literacy in the sense of how people take in information through art, listening and reading.

When she is not working or studying, she freelance writes and performs slam poetry. Smith is currently working on an autobiographical chapbook of poetry composed of her private childhood journals that she has been writing since the age of twelve.

Smith was diagnosed with post-traumatic stress disorder (PTSD) brought on by sexual assault, so her writing is something that she views as both therapy and a means by which to track her psychological progress of healing.

“I write to get out emotionally traumatic feelings,” said Smith.

Through the words in her chapbook, she tries to guide the reader through the development of a mental disorder by writing it into poetry.

She hopes the chapbook will become a voice for people who have experienced this kind of trauma without telling anybody.

“Looking back on those, and compiling them for this book…It was like, I could visually read and see the trauma,” said Smith. “I could go through and see different phases where I was twelve, thirteen, fourteen. Seeing doctors for the first time and not knowing why I was blacking out entirely because my body decided not to process anything that had happened. I just lost my memory.”

At first, the trauma did not register with her body mentally, and she began reacting to it in a physical way which led to a temporary misdiagnosis.

“I was blacking out constantly throughout high school,” said Smith. “Just passing out, and they thought there was something neurologically wrong, but later in life, I was able to talk about it and get it out. It wasn’t until I was 20 that I told my mom or any of my family or said it out loud. PTSD formed very quickly and stifled everything about my personality. And you could see it in my writings.”

Smith said that she is a big fan of Ernest Hemingway, a fellow writer who went through some very traumatic experiences during the first world war as a volunteer ambulance driver with the American Red Cross.

As a follower of paganism, writing is something that Smith also connects with on a spiritual level.

With her poem entitled “Magic is Molasses,” she intended to make magic tangible and something which you can see as a power over your mind. To Smith, magic is like the sensation one gets from molasses because it is something that does not necessarily make sense, but it is there and has a psychological effect.

She said that magic is something that you cannot explain and is often beyond what we can put into words, but expressing the feelings associated with magic through writing is something she nonetheless took up as a personal challenge with “Magic is Molasses.”

Magic is not just something that she connects to on the basis of her spiritual affiliations–she also relates to it as a student of psychology.

Smith is not exclusively a poet. She has also dabbled in fiction writing. Her short-story titled “Oscillating Fan Fiction” was a fun and very imaginative piece that sat in the back of her folders for a while until she submitted it to GS’s Miscellany.

After a long hiatus, she was able to take her work as a freshman and refresh it into something more refined and beautiful.

“I have since revised it, but that’s when it was started,” said Smith. “Yeah, the idea. And I’m not sure where it came from. But I remember seeing a fan like an actual fan, an oscillating fan, obviously, just thinking—I was reading, it was probably fanfiction honestly—and I just remember making that the pun. But it was fun to write, and that’s what I like. It’s having fun with words.”

Another thing that she said changed her life was singing in her high school chorus. Smith went to Southeast Bulloch High School and said that participating in their music program gave her a confidence that she never thought possible. Being in the choir helped introduce her to getting things out in a self-therapeutic way, as writing did.

“This tiny little terrified fourteen-year-old, in the throes of PTSD, having absolutely nothing, to being able to share such an intimate connection with music with so many people,” said Smith. “Because when you’re in a choir you have this connection that creates all the sound, and it just healed me when I didn’t know I needed healing. And it was my outlet.”

Despite the fact that being in Statesboro and going GS has been a largely positive experience, Smith plans to eventually move on to a different university in a bigger town or somewhere overseas, as GS has taught her that universities are the foundation and the stepping stone of information. Nonetheless, Smith has found that Statesboro, even as a small town, has given her a lot of opportunities.

As someone who grew up right outside of Statesboro, GS could not be a home away from home because she felt that she never left home. Even so, the Statesboro area is the place where she has struggled and grown, and thereby changed forever as a person.

“But while you’re head-down in the books, you know, it feels like the world’s closing in on you sometimes because it does feel like a small-feel university. . . . [but] it’s GS, the football games are like none other,” said Smith. “In the student section, it’s camaraderie, but at the same time it’s a familiar familiarity, like your family, like you get kind of tired of it sometimes coming home from Thanksgiving, talking about politics.”

Smith further revealed that her time as a part of the writing community at GS has also been a positive and uplifting experience.

“It’s always positive. There’s not a single instance where I performed or read my poetry for Georgia Southern students where I felt a judge or where I felt out of place, and having a community that does that is just unparalleled,” said Smith.