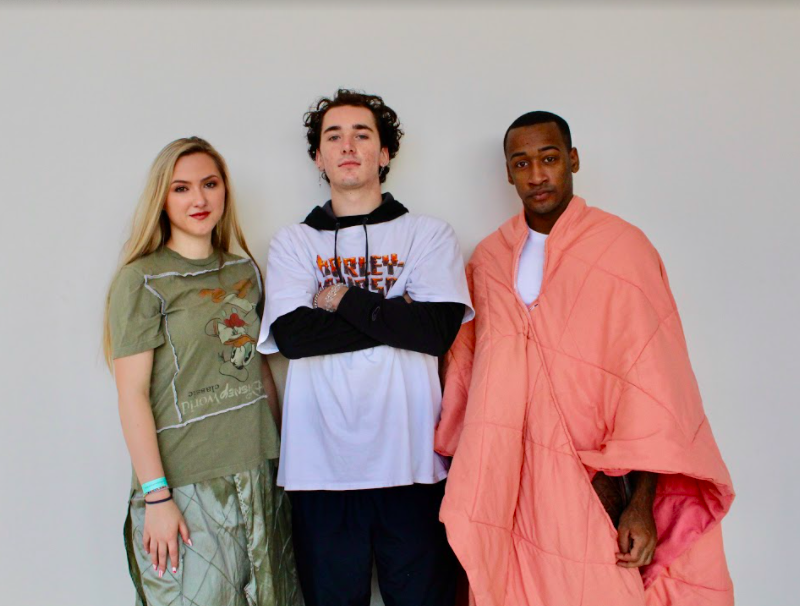 While Macconnell only recently started to consider himself a student designer, he is already interested in getting his art out there and noticed. Macconnell had a sudden interest in fashion in high school, and, due to his homeschooling, he had a lot of free time to explore this newfound craft.

“I kind of just started looking at clothes and then it evolved from there,” said Macconnell. “I just kept looking at higher and higher [fashion].”

There are some select inspirations Macconnell noted like Kerby Jean-Raymond and Craig Green. Both are known for their avant-garde style—Green more so than Jean-Raymond. While both designers frequently work with bright colors and unique design choices, Jean-Raymond’s work is more wearable, as eccentric as it may be. Green’s designs are pieces that would cause a lot of heads to turn, if seen while walking down the street. This ties into Macconnell’s vision for his own pieces. Macconnell wants his clothing to be considered art, and has always gravitated to the avant-garde side of fashion.

“Because I was homeschooled, I played a lot of video games, and I think it kind of has pulled me towards the fantasy, bigger-than-life element,” said Macconnell.

Macconnell first considered himself a designer after completing the 2020 Uncivilized Fashion Show, an annual creative exhibition at Georgia Southern University.

Initially, Macconnell was just going to style a few pieces for the fashion show, but after thinking, he decided that he wanted to push his abilities for the show.

“I [thought], I’m not pushing myself enough for this opportunity and just completed a ground-up design,” Macconnell said.

He created seven pieces for the fashion line and spent around two months making the clothes, fitting models and attending rehearsals for the show.

While it was a lot to get done, Macconnell took advantage of the 2019 winter break to do most of the work for his pieces. As soon as he was done with classes for the day, he was  in the design lab setting the groundwork for his upcoming show.

Macconnell definitely has an outline of what he wants to do after he graduates. He is interested in the international fashion world and hopes to fully immerse himself in it after receiving his degree.

“I’d love to live in Europe for a couple of years, a lot of great icons lived in Europe,” Macconnell said.

Not only does he have international plans, but Macconnell also hopes to have his pieces taken to an even higher level of avant-garde and become something more than just a brand.

“I’d like to make art pieces that people can have in their home rather than someone paying for something online. I’m kind of just me,” Macconnell said.