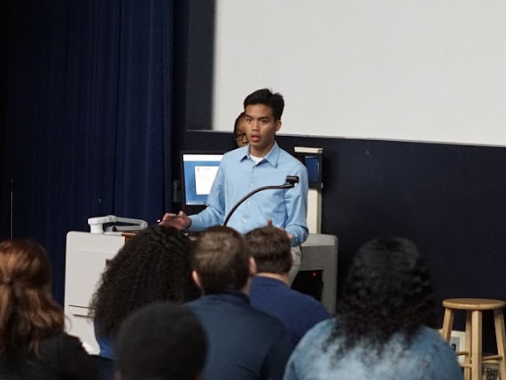 According to the article, Kohler asked how Lopez can effectively lead the SGA after making advances toward female senators, who were uncomfortable with said advances.

“I can lead SGA with the same confidence as I have before,” Lopez said at the debate. “As far as the behavior you are accusing me of, my professional background should not come together with my personal background.”

“I will answer to the person who asked the question,” Lopez said to Tyack in response as reported by The Inkwell.

Tyack later commented on the exchange at the debate.

”I think that it speaks for itself that Senator Lopez was unwilling to take responsibility for his actions,” Tyack said Wednesday. “He backtracked a lot, but then he got himself kind of in his own circle. Saying that you’re professional and personal life should not mix is a ridiculous statement, especially, in one, college, and two, this day and age.”

Lopez said on Wednesday fully denies the accusations, but supports anyone’s efforts to seek truth about him and any of the other candidates.

“As with any aspiring leader, it is inevitable that false allegations and rumors will begin,” Lopez said in an email. “In a sense, I welcome them because it pressures me to work even harder in correcting my imperfections while reminding me that I still have enough influence to have critics.”

Dean of Students Andrew Dies said he knew nothing of the accusations made against Lopez.

“I wasn’t at the debate, so I have absolutely nothing to say about it,” Dies said. “You are the first one that has ever said anything about it to me.”

The George-Anne emailed SGA President Jarvis Steele to comment on the accusations against Lopez but Steele has not replied.

Lopez, along with presidential candidates Keyshawn Housey and Juwan Smith, will be at a second SGA presidential debate on Statesboro’s campus. The debate begin after SGA’s weekly 6 p.m. meeting on Wednesday.

Coy Kirkland contributed to this article.