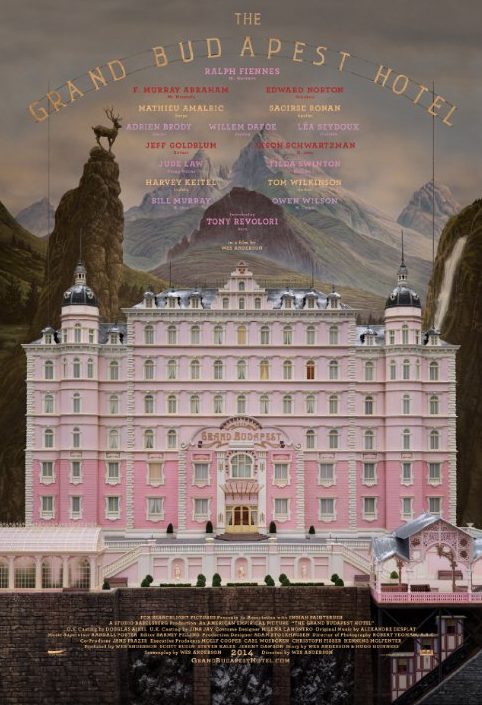 There are many who do not care for Wes Anderson’s films. They are non-mainstream, quirky and weird films that often revolve around unflattering individuals usually in the midst of some mid-life crisis. His films have a very specific aesthetic that can easily annoy some viewers with their repetitiveness and character-alienating features.

Though he does not appeal to many moviegoers, Anderson’s loyal fan base has stuck by him since his film debut “Bottle Rocket” in 1996 and enjoyed the six offbeat dramedies he has made since. His latest film “The Grand Budapest Hotel” features a huge ensemble cast and one of Anderson’s most energetic and madcap story lines yet with a film that is bound to reach all audiences.

The main plot is set within three framing devices that center the story on M. Gustave (Ralph Fiennes), the head concierge at the illustrious Grand Budapest Hotel who takes the newly hired lobby boy Zero (Tony Revolori) under his wing. After the death of one of the hotel’s wealthiest and most valued clients Madame D. (Tilda Swinton), Gustave and Zero become embroiled in a complex and comical web of thievery, murder, and general mayhem.

The two elements of Anderson’s latest film that are most notable are the outstandingly framed cinematography and production design and the outrageously outlandish cast that were game for anything. The camera work in the film is impeccable, and the attention to detail present within the frame is nothing short of the brilliance of Stanley Kubrick’s work.

The contrast of the real locations and sets alongside the use of miniature models and other effects is impressive and visually striking, making this by far the best looking film of the year thus far. All the performances hit all the right notes, especially the two leads. Fiennes is known for his dramatic abilities to play evil, maniacal villains of films like “Schindler’s List,” “Red Dragon” and the “Harry Potter” franchise, but his talents have been wasted because of his obvious knack at comedy.

His creation of M. Gustave is one of the most delightful and entertaining pieces of acting that has ever been captured on film. Revolori is excellent as Gustave’s young protégé, and it is clear that he has a long future acting in movies.

Despite featuring an incredibly large cast, no one is wasted in their part. Swinton is  particularly memorable being buried under extravagant old-age makeup, and fellow Anderson regulars Edward Norton, Willem Dafoe, Adrien Brody, Jeff Goldblum and the always welcome Bill Murray also work their magic in smaller, yet essential, parts. The real standout of the supporting cast, however, is F. Murray Abraham as an older Zero who emotionally recounts his adventures to a young writer (Jude Law), who is often forgotten and unappreciated among the many character actors out in Hollywood.

Anderson has long proved himself as one of the most innovative and original filmmakers of his generation with films such as “Rushmore” and “The Royal Tenenbaums,” but here he is truly in top form. There is a lighthearted tone throughout the film, yet the director is never afraid to give his viewers a jolt with a gruesome murder or two, or three. Anderson cherishes his story just as much as he does his characters, and his lighthearted tone never dismisses his often emotional outlook on the complexities of the world and his characters. This is a smart and hilarious film that will be hard to forget and impossible to dislike.