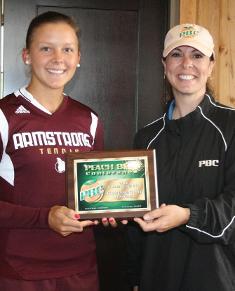 Before play began for the Lady Pirates, several of the girsl took home honors at the annual PBC awards banquet. Senior Aleksandra Filipovski took home the top honor of the night after being named the 2014 PBC women’s tennis Player of the Year.

Filipovski is the No. 3-ranked singles player in the nation for the No. 2-ranked Pirates, and had a 19-1 record in regular-season play. She has played exceptionally well this year against top-ranked opponents, as she went 6-1 against nationally-ranked players, including defeating the No. 2-ranked and two-time PBC Player of the Year Paolo Cigui of Columbus State University. Filipovski is the 17th player in Armstrong women’s tennis history to take home the honor and the first since Alida Mueller-Wehlau in 2011.

Seniors Barbara Krtickova and Marlen Hacke made the league’s first-team for singles. Junior Clara Perez and sophomore Carolina Parts-Millan made the second team.

Filipovski, Krtickova, Hacke and Olga Kalodzitsa all made the first-team for doubles. Perez and Prats-Millan made second-team honors.

The ladies’ leader Simon Earnshaw earned his eighth Coach of the Year honor in a row, and 13th overall.

Once play began, Armstrong continued its dominance. The ladies cruised through its competition and were set to play Columbus State in the championship match. Due to rain, the match could not happen, and as the highest seed left, the Pirates took home championship.

Ironically, after all her teammates won awards the night before, it was freshman Dora Andrejszki who took home the PBC Tournament Singles MVP. She went 2-0 in singles play.

Andrejszki didn’t even know that they named an MVP going into the tournament, and her teammates joked that the sooner you finish your matches, the better your chances are to take home the award. The timing worked out well for the talented freshman who has enjoyed a solid first year.

“It’s really nice that I won the award and I was very excited when they called my name,” a happy Andrejszki said.

The Lady Pirates will await their seeding for the NCAA Regionals with the announcement on April 29 at 8:30 p.m.