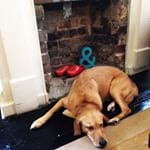 My dog is a special breed. I don’t mean “special” to imply that he’s a novel breed or even purebred; he’s not. Rather, I mean “special” in the pejorative sense often attributed to those with a lower IQ or even mental retardation. His name is Charles Barkley and he is a Yellow Lab/Golden Retriever mix.

Charles was given his particular surname not because I am a fan of the popular basketball player – instead it was my tipsy attempt to make light of the fact that he rarely ever barks and, therefore, is not a true dog.

I don’t mean to be mean. Charles is a sweet, sweet soul, but he lacks many, if not all, behaviors associated with traditional canines. When food is placed in front of him, he takes precisely one bite before traipsing away disinterestedly. When a toy is thrown for him to fetch, he runs to grab it with initial excitement, then trots and drops it in the corner of the room. Even when enticed by a treat, his ears perk up and he prances over to receive his due – only to allow the snack to hit him in the face with nary a wince.

I can’t blame him entirely. I adopted Charles when he was two years old. I had gone with a friend Kari to pick up the puppy she wanted from the Humane Society. I had no intentions of adopting; I had never even had a dog. But when I walked down the row of outdoor kennels, the only dog not barking adamantly at me was Charles. I took one look at this melancholy animal and my heart swelled.

Ten minutes later I emerged from the fenced enclosure, only to close the gate and see the sign: THIS PET HAS HEARTWORM. CONSULT FRONT DESK.

My heart dropped to my stomach. My friend was still walking her puppy around the facility, so I went to the desk and inquired about the dog. After being told his heartworm was severe and he would need to be treated and fostered for a month before adoption, I filled out the paperwork. My head swam with the unexpected minutiae of adopting a sick dog.

A week passed and the new and improved Charles (then named Jake) was ready for pickup. I had the house all decked out in dog stuff – treats, bed, crate, Kibbles, Bits – the whole nine. From the time he arrived, he wouldn’t do anything but sleep. This was to be expected after a major treatment, said the vet. “Just wait a month. He’ll be a normal dog before you know it.”

It’s been three years since that day.

I shouldn’t complain though. Charles Barkley is the best boy I could ever ask for. He cuddles endlessly, looks at me with infinite love and acceptance, and keeps me company at my most anxious times.

My dog is a special breed – he doesn’t even bark.