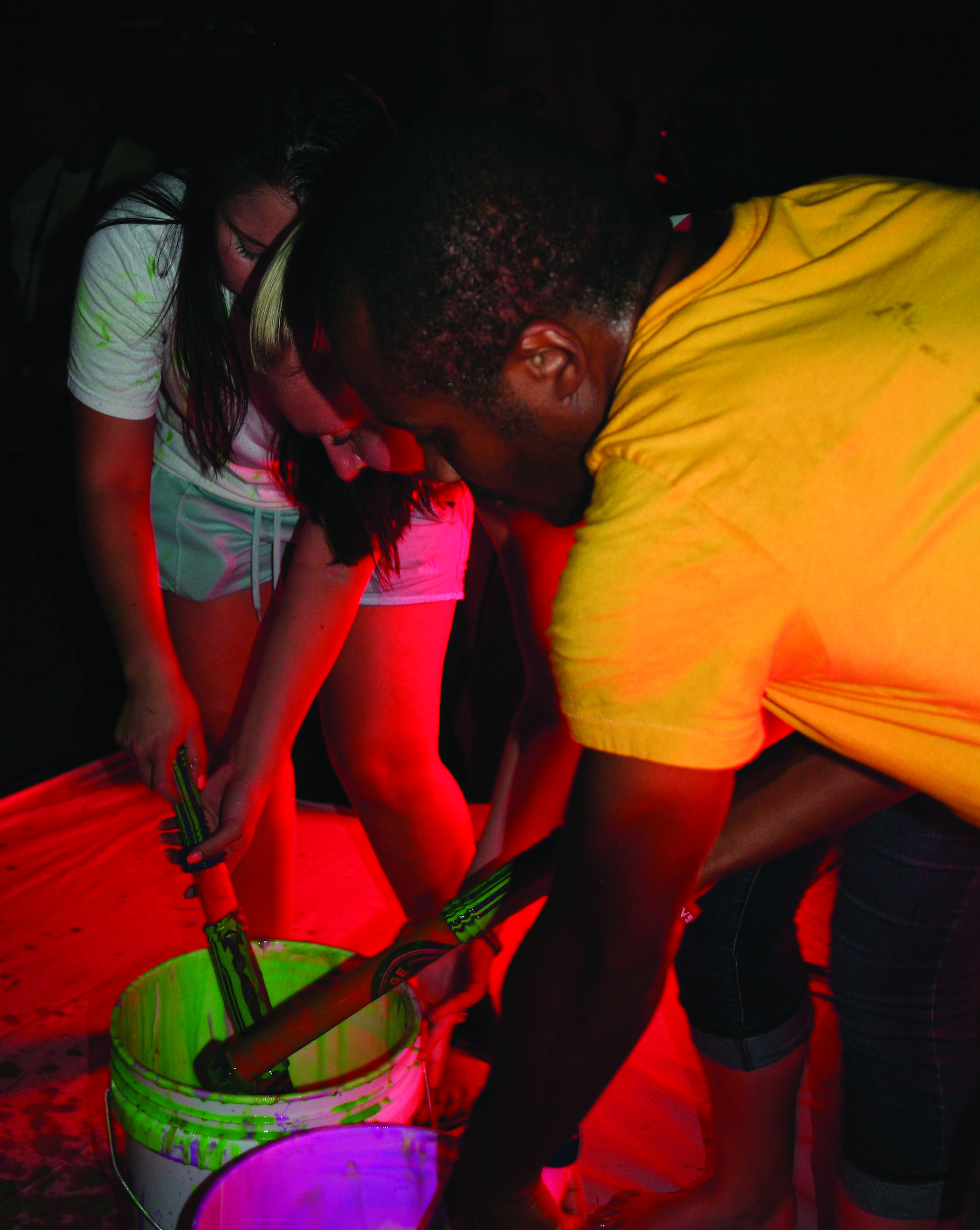 Around 8:30p.m. last Saturday, Armstrong’s eerily quiet campus sparked to life as GlowRage DJ, Ben Sremba dropped a beat that shook the very foundation of the campus.The party was originally to begin at eight. Gabrielle Grubbs, a member of the Campus Union Board stated, “I expect curiosity to draw in all the cats.”

Despite the threat of rain and the warning flashes of lightning, Armstrong’s campus came to life, filled with students who planned to attend the event and curious spectators. Thus, Armstrong hosted its very first paint party.

Grubbs said, “It’s pretty much a party with a twist. People typically have parties, but not paint parties. We’re expecting high engagement, plus it’s a new attraction.”

While the event was sponsored by CUB and coordinated by the Open Door Committee, GlowRage brought the life to the party. “We travel around the country doing between two and three hundred tours a year, mostly at nightclubs,” DJ Ben Sremba explained. “Armstrong is our last stop after a weeklong tour called GlowRage – Campus Edition.”

So you might be wondering, what exactly is a paint party and why all the hype?

The answer is simple: for Armstrong it was like an outdoor rave, accompanied with neon lights, cameras, uncensored music, dancing, and – of course – a variety of paint.

Unfortunately some students weren’t too happy with the music blasting right outside their dorms. Before the party had even started, a girl and her friend from Compass Point poked their heads out of the window and screamed, “Turn it down! I’m trying to study!”

A few students that had overheard the proclamation simply shrugged it off. In their opinions, Saturday nights weren’t for studying.

Hoping to intercept others as they left their dorms, students rushed over to inform them about the paint party.

It seemed as though not everyone was aware of Armstrong’s plans to bring out the night life.

Courtni Macon, as well as others, were somewhat exasperated with the whole thing. “The walls of my room are vibrating,” Macon commented. Macon and her friends were quickly talked into joining the party, however.

Unfortunately there was no way to appease every resident of Compass Point and Windward Commons as they called in to file noise complaints.

Regardless, the paint party continued.

By nine o’clock a large group of girls came down from their dorms to help kick off the party.

“I’ve never been to a paint party,” Kim Crabtree said as she stood amongst her friends, all of which were dressed in similar cut white shirts and blue jean shorts.

As the music got louder and the paint started flying, the students began to loosen up and dance with friends and strangers alike.

“I didn’t expect complete strangers to dance with each other,” Sarah Brown said, dripping with paint from head to toe. “I went to the Black Light Party, but this is way better. It’s not as hot and it’s a lot freer, because at the Black Light party it was Zumba and you had to follow instructions.”

Near the end of the party everyone was drenched in green, pink, and purple paint. Some students headed off to play soccer nearby, or in Lexis Young’s case, “I got paint everywhere, now I want to hug people.”

Michael Silver who runs the GlowRage Company expressed, although the turnout wasn’t nearly as big as the others, he was glad to be at Armstrong.

“I don’t usually go on the tours myself, I have people to do that for me, but we love Savannah and we love Armstrong,” Silver said.

With approximately forty people showing up, the Paint Party was a success and next year they plan to make it bigger.