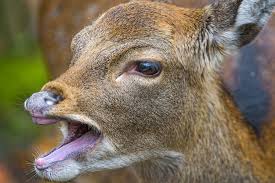 A renegade deer ran through Armstrong’s main campus near the MCC building at noon Monday, Oct. 13.

Students breaking for lunch screamed and pointed as the speckled visitor bolted across the courtyard near the Student Union Center.

Spectators say the deer entered through the Galley’s truck docking area between the Memorial College Center and the Student Union. Terry Coleman, a stock person for Quiznos and WOW Cafe and Wingery, says this is the second deer sighting he’s seen on campus in two years.

“There was a deer that came around here just about the same time last year,” he said. Coleman was outside with another co-worker when they saw the deer approach the building. He claims the deer tried to use the ramp entry on the bookstore side of the Student Union, then turned and ran toward the loading dock.

The deer appeared to be slightly injured. “It had blood around its mouth,” Coleman said. Another source says the animal actually had fruit in its mouth.

Once inside the loading dock, the deer headed for the Galley.

“I was just getting my soup and suddenly all the servers were screaming, running toward the exit and yelling for the chef,” Sophomore English major Kylie Fields said. “It was pretty chaotic.”

Students crowded in an attempt to catch a glimpse from behind the main entree serving area as baffled employees in the back kitchen tried to evade the deer.

Stranger than a deer running through campus is the fact that the animal remains at large. University police are still keeping an eye out for the deer, who was allegedly never seen leaving the building following the cafeteria fiasco.

“It seems like a stand out thing,” Communications Officer Michele Prather remarked, “but nobody’s seen the deer since.”

Prather says the university police are still awaiting a call back from the Georgia Department of Natural Resources, but says there isn’t much to tell them at this point.