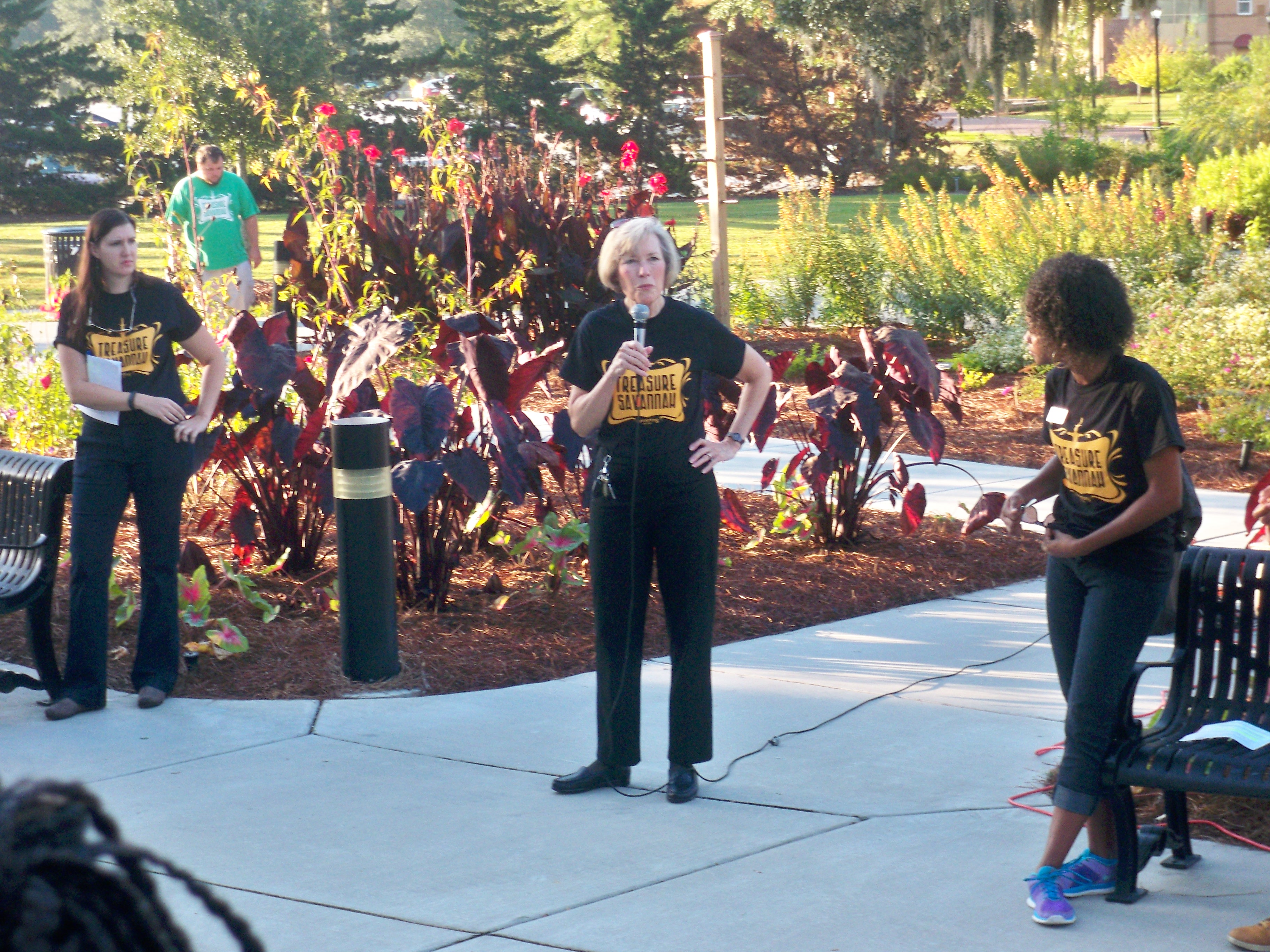 On Oct. 11, a large group of students, faculty, and staff gathered outside of the Student Union to prepare for Treasure Savannah. Lively music played in the background, pumping everyone’s spirits as they got in line to receive their community-service assignments, name tags, and t-shirts. After all the volunteers arrived, everyone was directed to the front of the Student Union building. Dr. Georj Lewis, Vice President of Student Affairs, thanked everyone for sacrificing their time to volunteer and make a difference in the community. After addressing the crowd, Dr. Lewis introduced President Bleicken.

Bleicken thanked everyone again for coming out, gave a brief history of Armstrong’s beginnings and stressed the importance of Treasure Savannah. After her speech, photographers captured images of the crowd, then everyone got on buses to go to their volunteer spots.

Armstrong’s website describes Treasure Savannah is an Armstrong day of service that celebrates Armstrong’s long and rich history in Savannah. Hundreds of students, staff and faculty learn about the issues facing our city, giving back to our community, and building connections between Armstrong students and the surrounding community.

Melanie Badding, a 1st year grad student and volunteer at the event said, “I’ve tried to do Treasure Savannah in the past and haven’t been able to. I picked this spot [West Broad Street YMCA] because I thought I’d be working in the garden. I ended up doing something else and enjoyed it. I didn’t know they offered so many opportunities to volunteer. I like volunteering and helping children in the community.”

The event was such a success that it has since turned into a biannual event.  Treasure Savannah is held each fall and spring.  The fall event typically is the Saturday following Celebrate Armstrong and the spring event is held in late February or early March. Participation in Treasure Savannah is open to Armstrong students, faculty, staff, and alumni. Places where people volunteered included Forsyth Park and the surrounding Victorian District, Union Mission Grace House Kitchen, West Broad Street YMCA, Ambuc Park, Lake Mayer, Hinesville Rivers Alive, Hoofs 4 Healing and various areas around Armstrong’s campus.

Mercedes Williams, another volunteer at the event, commented, “I’m apart of Alpha Phi Omega, a national co-ed community service fraternity and I’m a Health Science major so I like helping people. I loved seeing the look on the coordinator’s face [at West Broad Street YMCA] when we finished organizing the storage closets…and finding random Armstrong stuff.”