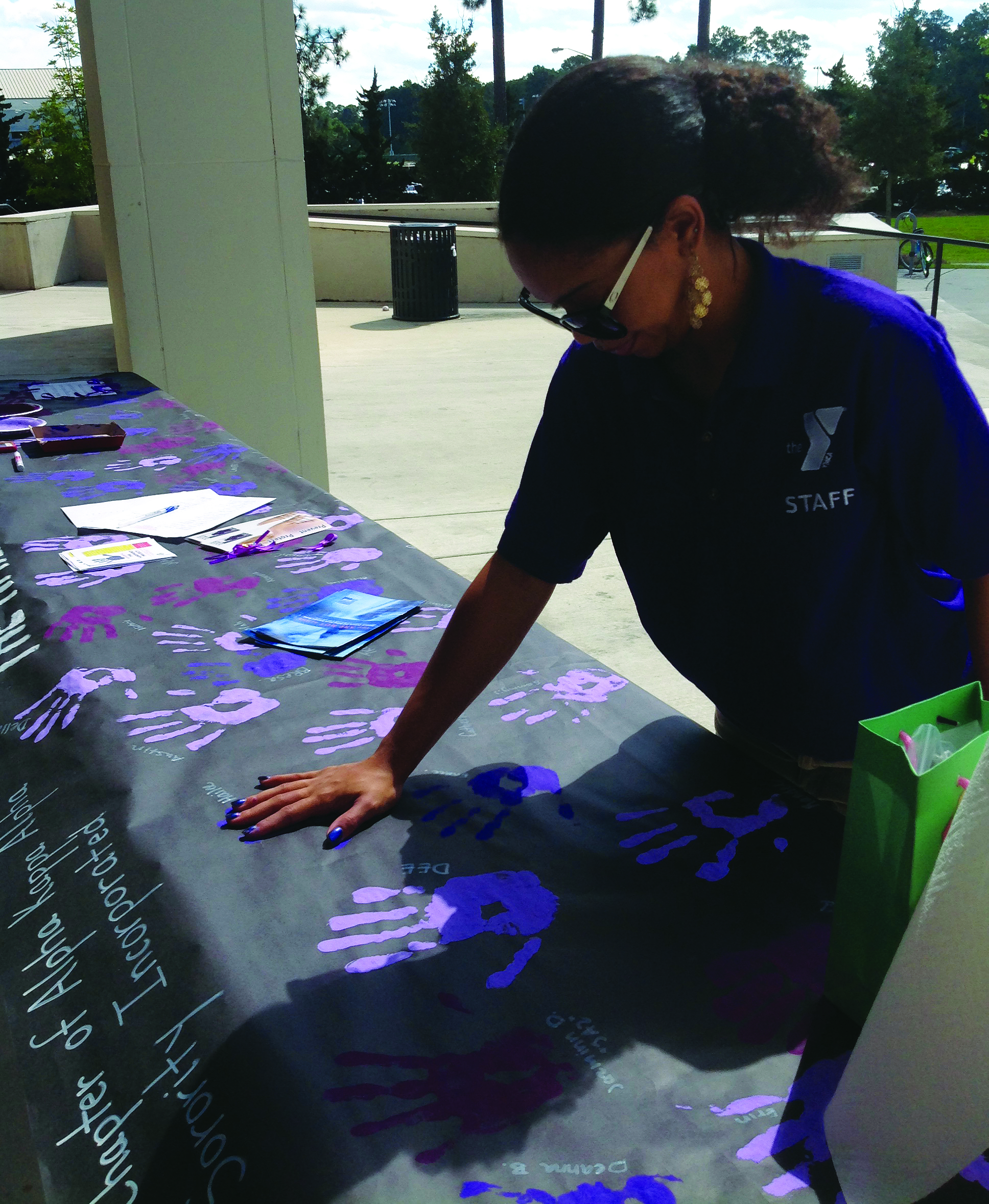 The month of October is Domestic Violence Awareness month, and although it’s a very difficult topic, Armstrong’s Sigma Tau Chapter of Alpha Kappa Alpha sorority didn’t hesitate to bring awareness to the campus. On Oct. 15, they held their first Handprint Pledge on the steps of the Student Union.

“It’s a pledge against domestic violence,” the Vice President of the organization, Jatinique Lucas stated.“They are pledging to not be a part of domestic violence and to intervene in the case that it occurs,” she added.

While working towards their goal, AKA also gave out ribbons, had a guest speaker, Rose Grant-Robinson, and spoke about Take Back the Night. The event is designed to, “help take back the feeling of discomfort at night. It’s a big deal for college students,” Lucas said.

There are multiple cases of domestic violence each and every day, and a pledge is the first step in the right direction. With a goal to get fifty pledges, students flowed in left and right, while a few stopped to make a statement.

“If we all put in an effort to stop domestic violence, we can,” commented Leena Ali, a member of Feminists United.

“I made the pledge because I’m against domestic violence. I’ve grown up with friends that’s been abused and against it. I’m up for it,” student Merlon Jones added.

A student, who asked to remain nameless for the sake of privacy, spoke up on their story and the struggle of dealing with domestic violence, “A year or so before I was born my mom lost my older sibling before it was his time. My dad had a temper, still does. When I was three, he kicked her through a window and broke her nose because my mom let me go up north with my grandparents. By the time I was fourteen I had completely lost myself. I just stopped caring. Right before I left for Armstrong my dad started a screaming match with my mom. I remember wanting to grab my baseball bat and smashing it into his face, but it all ended. They ‘made up’ and then I was freed from it all. College was my escape and I hated myself because I couldn’t keep an eye on my mother, because I couldn’t protect her.”

“Talking about domestic violence is a tough topic. It’s everywhere. It doesn’t just damage the victims. Violence is occurring all over the place, not just in Savannah and not just in the US. Violence is exchanged in return for violence,” Lucas said.

She went on to explain that the Handprint Pledge was a way to retaliate against the violence without violence. “Don’t feel like you have to stay,” Lucas stated. “I’m not certified to counsel anyone, but if you ever need to talk I can direct you to the right people. Don’t feel like you’re alone. We will lead you in the right direction, such as places like The Rape Crisis Center, Savannah Safe Shelter, the Counseling Center on campus.”