Humans vs Zombies comes to Armstrong 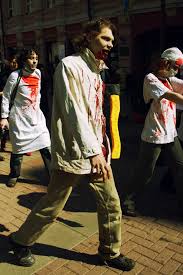 Something evil woke up when Armstrong relocated from Downtown Savannah to the South-side. This evil remained silent until three years ago when Armstrong built dorms where the woods were once located. Disturbing burial grounds and upsetting spirits, the school would unintentionally raise hell on earth as the dead came to life.

It would be up to the entire Armstrong community, students, faculty, and staff to push back the dead.

While the infestation was wiped out with only one human remaining, Armstrong would take extra precautions. To keep the zombies under control, they have developed a Biochemistry Department to work on a cure. While the new Biochemistry Department is working on a cure, it seems that the undead are becoming restless. It’s time to once again lock and load and save the Armstrong Community.

“Humans v Zombies is a giant game of tag,” Humans v Zombies coordinator, David Gaskin, stated. “We have to go online and get a game request to keep track of who’s human and who’s a zombie.”

Alpha Phi Omega initiated the upcoming event that will be hosted from Nov. 10 to Nov. 14 between the hours of 8 a.m. and 8 p.m.

While the real apocalypse may not be upon us, it’s going to be an all out war on campus. A wide variety of weapons will be used to stun zombies, like Nerf guns, marshmallow launchers, sock-bombs, just to name a few. To the human team’s dismay, zombies only die when they haven’t fed for forty-eight hours.

That, and if you’re sitting in class with a zombie, there might just be a horde waiting for you the moment you step out of the building.

Alicia Evans, Vice President of Service for the Rho Beta Chapter of Alpha Phi Omega said, “This is a campus wide event. Everyone is invited.” Everyone includes students, faculty, and staff. “We love getting involved with community service and we love getting the campus involved. Who doesn’t like being a kid and playing tag?”

This is the first time Alpha Phi Omega has hosted HvZ, but it has been hosted at schools like SCAD and UGA.

“APO is a co-ed fraternity that focuses on service to the community and campus alike,” Kathleen McKenna, President of Alpha Phi Omega said.

While the campus may be fighting off hordes of zombies, the fraternity built in missions for humans benefiting not just the Armstrong community.

“Each day humans are given a mission they have to complete. One will be collecting can goods and nonperishable food to donate to the Union Mission. The goals of the zombies is to prevent this from happening,” Evans said.

More rules and information can be found at http://hvzsource.com/apo.

All information will also be sent via email before the game officially starts.