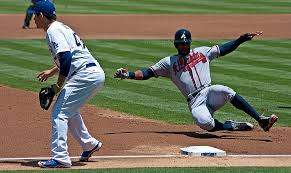 The Atlanta Braves struggled down the stretch of the 2014 season and failed to make the playoffs. After contending all season long, the Braves folded in August and September only to watch the rival Nationals take the NL East division crown. But what were the problems for the Braves? Was it just a lack of good baseball late in the season? Some would say that’s the case. However, when examining this roster moving forward, I believe some serious, albeit simple changes must me made prior to the start of the 2015 season. If Atlanta makes these changes, they will be World Series contenders.

The first change the Braves must make is to fill the bench with veterans, not young prospects. Atlanta needs a veteran presence on this team, they need guys who have won championships on their roster for this season. Guys like Phil Gosselin, Ramiro Pena, Jordan Schafer, Gerald Laird and Ryan Doumit simply didn’t cut it last year. Emilio Bonifacio is a nice piece off the bench because he provides manager Fredi Gonzalez a lot of different tools to use.

Besides Bonifacio, the Braves need to rebuild the bench. A player I’d like to see Atlanta acquire is free agent catcher Russell Martin. Martin, the 31-year-old, played his last two seasons in Pittsburgh where the Pirates made the playoffs both years. Martin can be a producer off the bench, but I’d like to see him platoon regularly with young catching prospect Christian Bethancourt. Which leads me to the second Braves off-season move that must be made.

Atlanta needs to trade Evan Gattis before spring training 2015 begins. Gattis has been a fan favorite since he first came up to the big leagues in 2013. “The White Bear,” as he has come to be known around Atlanta, hit .263 last season with 22 home runs despite playing in only 108 games. His defense, while being below par, has been constantly improving since he moved behind the plate full time. However, the defense of Gattis will never be worthy of a full time NL catching role. Furthermore, the value of Gattis to opposing teams has never been higher than it is right now.

If the Braves can find a team interested in Gattis, who has a favorable contract, then maybe, just maybe, they can lure that team to take on the contract of BJ Upton as well. It’s a stretch to think that any team would be willing to take on the 40 million still owed to Upton, but considering the very favorable Gattis contract would be going with it, there is a slight chance to package the two together.

Finally, the last move the Braves need to make this off-season is to rebuild the bullpen from the 9th inning forward. Closer Craig Kimbrel and setup man Jordan Walden are locks for the 2015 pen, but everyone else, and I do mean everyone else, should be closely evaluated. Two free agent relievers the Braves should be targeting are Baltimore lefty Andrew Miller and Yankees righty David Robertson.  Luis Avilan, Anthony Varvaro, and James Russell (acquired in July 2014) simply won’t cut it for the Braves in 2015. If Atlanta expects to limit innings on starters coming off of injuries like Kris Medlen and Brandon Beachy, then they had better find some strong arms to put in the bullpen.

Atlanta needs make these three changes if they expect to contend in the NL East in 2015. Washington, Miami, and New York are all improving teams that are bypassing the Braves personnel-wise in recent years. Veterans off the bench along with an improved bullpen will immediately improve this team. Trading Evan Gattis now, and possibly packaging him with BJ Upton in the process should improve the team for the coming years. The 2014 off-season is an important one for Atlanta, and they had better not botch it. If they do, it could spell disaster for everyone involved.